Ontario drivers save $772* on average with RATESDOTCA.

As a car owner in Canada, you are obliged to have auto insurance. Ottawa car insurance works under Ontario auto insurance regulatory model. Here are the mandatory and optional coverages and common endorsements:

Insurance in Ottawa is regulated by the Financial Services Regulatory Authority of Ontario (FRSA), which is responsible for licensing insurance companies.

While providers are regulated, FRSA allows rate increases or adjustments to pay for operating costs, claims and profit. Besides mandatory coverage, Ottawa drivers can opt for policy endorsements on:

How to compare Ottawa car insurance quotes on RATESDOTCA

How much does car insurance cost in Ottawa?

Car insurance in Ottawa is lower than the provincial average — $300 a year less, a significant saving for those living in our nation’s capital. We looked at quotes offered to 35-year-old drivers with clean driving records in different Ottawa neighbourhoods. For this demographic, insurance prices range from $1,206 at the low end to $1,378 at the high end in the Ottawa area.

Why is Ottawa car insurance lower than the provincial average?

Insurance is all about risk. Insurance companies deem Ottawa a less risky place for drivers and thus offer cheaper car insurance to its drivers. Given the population and density of the GTA, for example, compared to Ottawa, insurers are willing to keep costs lower in an area with fewer cars and commuters.

The RATESDOTCA Auto Insuramap is an interactive online map that lets users search for the estimated auto insurance rate in a city or neighbourhood by postal code.

All estimated premiums are based on a 35-year-old male driving a 2018 Honda Civic four-door with a clean driving record (gender becomes less of a concern for insurance providers after age 30).

The cheapest car insurance for Ottawa drivers costs $1,206 per year (according to data pulled in Dec. 2021) and can be found in the following postal codes:

How do Ottawa’s car insurance rates compare to other cities in Ontario?

Ottawa residents are fortunate to have an abundance of insurance companies to choose from when seeking the cheapest car insurance rates. Most companies prefer if you apply for a quote using their online services, but you can also call. Those companies include:

Car insurance premiums are never determined by just one thing. Your insurance provider has to assess risk from many angles to come up with a quote for you. These factors include:

Why does Ottawa car insurance cost as much as it does?

The average cost for car insurance in Ottawa is $1,257. While that might be a significant expense to drivers in that city, it is by no means the most expensive in the province. The provincial average is $300 more annually, coming in at $1,557.

But Ottawa is still a metropolitan North American city with many of the same driving risks and expenses experienced elsewhere. Comparing rates on RATESDOTCA is an excellent way to ensure your rates are the lowest they can be.

Which company has the cheapest car insurance in Ottawa?

Remember that where you live, your driving record and how you bundle (or not) your insurance will help you save money over time and help you keep rates low.

Can I get month-to-month car insurance in Ottawa?

Unfortunately not. Even if you are living in Ottawa for a short time or need insurance temporarily, standard auto insurance in Ontario lasts one calendar year. Some companies may offer six-month policies, but this is not the norm for car insurance.

I am a newcomer to Canada. How can I buy car insurance in Ottawa?

Driving experience from your home country will be helpful as you become a driver in Canada. Your previous insurance company will likely be able to provide proof of your insurance to your new Canadian provider. Likewise, as you build experience here, some companies will adjust your rate as you increase your local driving history. One of the best ways for newcomers coming to Ottawa (or Canada) to find the cheapest car insurance in Ottawa is to comparison shop through sites like RATESDOTCA.

Comparison shopping on RATESDOTCA can also help educate you on the best choices for insurance in your area. Also, try to work with a broker who can advise you on how to get the lowest rates, which policies are available to newcomers, and how to keep rates low.

If you have an international driver’s license, most carriers will require you to obtain a Canadian license before they write a policy.

Save on Ottawa car insurance today

Ottawa is a beautiful city, jam-packed with interesting things to see and do, and it has some of the safest roads in Canada. None-the-less, all drivers need car insurance, and the best way to ensure you are getting the best possible deal is by comparing quotes on RATESDOTCA. Go ahead, see how much you can save. 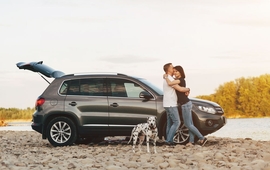