6 rate hikes in, RATESDOTCA data show Canadians may be slowing down their mortgage activity 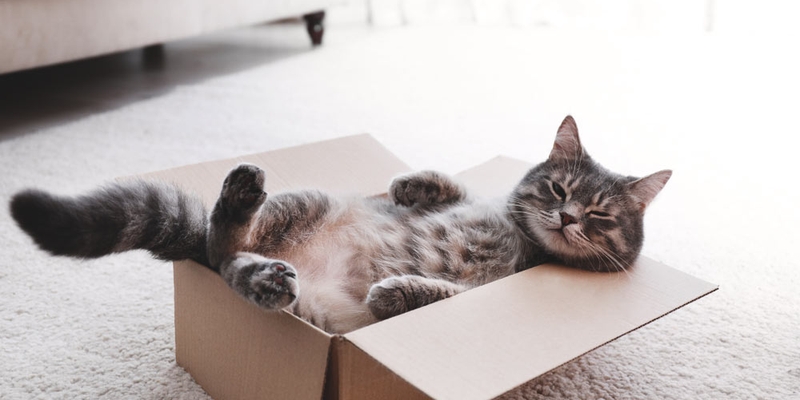 On the heels of the Bank of Canada (BoC)’s sixth rate hike of 2022, Canadian homeowners are feeling the burn, with 53% of homeowners concerned about higher mortgage payments upon renewal. With the most recent hike in October, the BoC raised its policy rate by 50 basis points, and while the increment has been smaller than predicted by analysts and industry experts, it brought the current overnight rate to 3.75%.

A look into mortgage shopping habits conducted by RATESDOTCA shows that there is slowdown in activity across all property and mortgage types, as Canadian homeowners and investors wait to see how market conditions unfold. The gap between variable and fixed rate mortgages is also narrowing, which indicates that fixed rates are now looking more attractive to buyers. 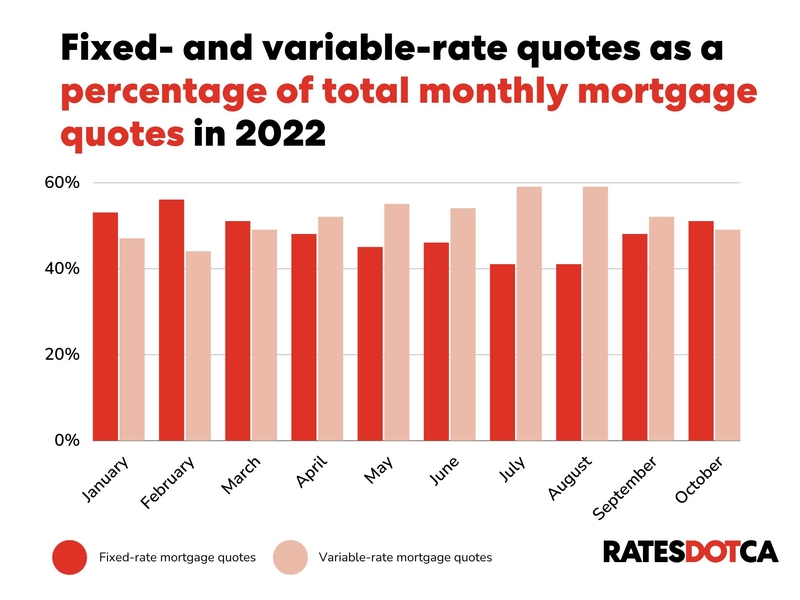 Preference gap between fixed and variable mortgages is narrowing

The preference gap between fixed- and variable-rate mortgages on RATESDOTCA is narrowing, with a difference of only 56 quotes between both product types in October. That’s compared to a difference of 619 quotes and 721 quotes in August and July, respectively.

While variable-rate mortgages were popular during the months of August and July, Canadians seem to now be looking at fixed rates to insulate themselves against rising rates.

Dan Eisner, CEO of True North Mortgage, notes that before the pandemic, about 35% of his clients chose variable-rate mortgages. However, to take advantage of the lower qualifying rate over this past summer, nearly 90% of customers were opting for variable. Before the prime rate increased, those on a variable rate benefited from some temporary relief. As fixed rates rose quickly over the summer, Eisner says, the prime rate didn’t increase until a few months later. As a result, those looking for a variable mortgage had an easier stress test to pass and lower payments for a few months.

“A large part of that is because of the procedure to qualify for a fixed-rate mortgage,” he says. “Now that the prime rate has moved up, qualifying for fixed and variable is similar. So, we’re seeing people trying to adapt to that normal dynamic. Right now, we are seeing an even split – more or less – between variable and fixed.”

Slowdown in mortgage quotes across all property types

In October, mortgage quotes on RATESDOTCA for all property types – investment, primary, and vacation – saw a steep month-over-month drop-off.

Compared to September, mortgage quotes on RATESDOTCA for primary and vacation properties decreased in October, by 59% and 64%, respectively. The demand for investment properties also decreased by more than 60%.

September saw the highest number of investment property mortgage quotes throughout all of 2022. The sudden drop-off in October could indicate changing sentiment among investors following the BoC’s most recent rate hike.

“When it comes to investment properties, I think there are a lot of people who are waiting on the sideline,” says Eisner. “If you are a buyer and are in no rush, you might as well wait to see which direction market conditions will go – will property values fall further? Or will they stabilize?” he says. “That could explain why there is a slowdown in investment activity.”

A RE/MAX article notes that successive interest rates and cautious lenders are decreasing competition for deals and making it harder for real estate companies to raise capital and move projects forward. 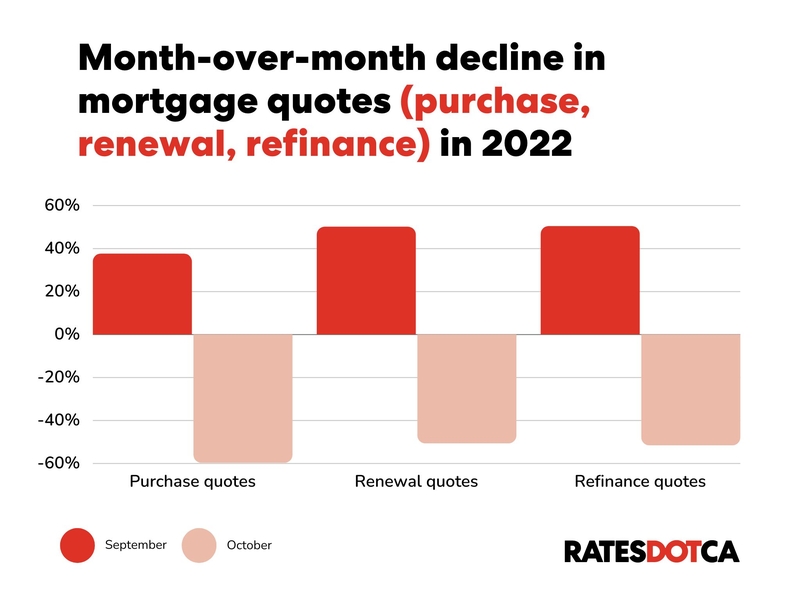 Slowdown in quoting activity for all mortgage types

“There is undoubtedly a slowdown in activity,” Eisner says. While winter is typically a slow period for homebuying, he notes that mortgage activity over the past few months has been unusually slow.

“Perhaps there will be a 10% market drop in prices in order to get the buyers back into the game. Or prices may stay stable for another six months, and that might give buyers enough confidence to get back into the game and start buying,” he says. “Everybody is waiting to see which of those two scenarios play out.”

Eisner says that while it’s hard to predict market volatility, consumers are looking at short-term mortgages because if they do end up making a bad decision, then at least they’ll only have to endure it for the short run.

However, this approach isn’t for everyone. “Locking into a one- or two-year fixed-rate mortgage with the intention of riding out the current volatility in the mortgage market is a strategy that might work for some and not for others,” explains Victor Tran, a RATESDOTCA mortgage and real estate expert.

Although there has been a lot of speculation about where interest rates are headed, there’s no guarantee that rates might rise or come down over the next two years. He notes that if a consumer can handle that possibility, locking into a short-term fixed rate can be a good idea.

“For those who are maxed out on their home expenses and can’t handle another increase, locking into a longer-term fixed rate might be a better option,” Tran says. “Additionally, short-term fixed rates are slightly higher than five-year fixed rates at the moment, so consumers would be paying more to bet on this strategy.”

What to expect from Canada’s housing market in 2023

With economists predicting a recession in 2023, the BoC may eventually need to lower interest rates in a bid to stimulate the economy. As inflation remains persistently high (although there has been some easing since the summer), interest rates are projected to keep rising, at least in the near term.

While there has been a definite slowdown in homebuying and mortgage activity due to the pressures of inflation, Eisner notes that there is fundamental strength in the Canadian housing market.

“The supply is well below demand for houses,” he says.

“In the long-term, the housing market is very stable, but the question is when will it stabilize? If I had to guess, I would say next summer.”