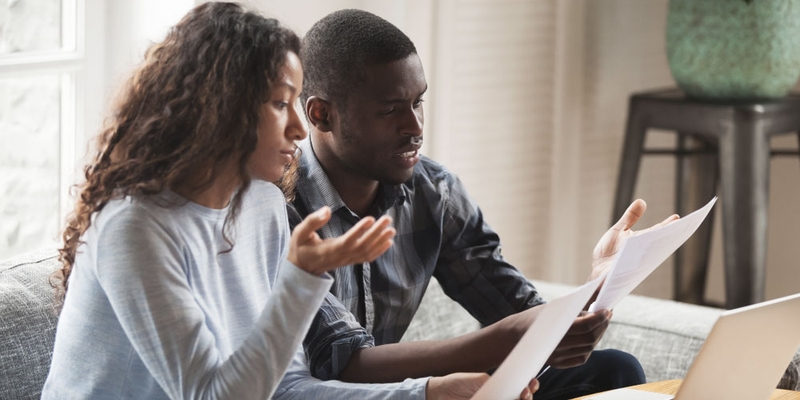 In light of the Bank of Canada’s six interest rate hikes this year, homeowners with a mortgage loan should brace themselves for higher rates at renewal over the next five years.

And according to a recent Leger survey conducted on behalf of RATESDOTCA and BNN Bloomberg, 53% of homeowners are already feeling concerned about an increase in payments when their mortgages come up for renewal.

While 52% of homeowners have a plan in place to meet those increased payments, half don’t consider shopping the market as part of that plan. In fact, 51% say they don’t plan to change lenders upon renewal, and 9% said they weren’t even aware that switching lenders was possible.

53% of Canadian homeowners concerned about higher mortgage payments upon renewal

According to the survey results, 48% of Canadians have a mortgage on their home and most are from the 35-54 age and high-earning ($100,000+ annual) demographics.

However, 53% of those who own a home with a mortgage express concern about an increase in their mortgage payments upon renewal, while 44% are not concerned.

Homeowners in the age range of 18-54 are more concerned than those 55 and older. It’s possible that some homeowners in this age demographic — namely younger first-time buyers — entered the housing market pre-pandemic, when interest rates were at their lowest and didn’t account for an increase in interest rates so soon.

On the other hand, of the 44% of homeowners who are not concerned about rising mortgage payments, 59% are aged 55 and older. This confidence could have something to do with the fact that older homeowners likely have more home equity built up. 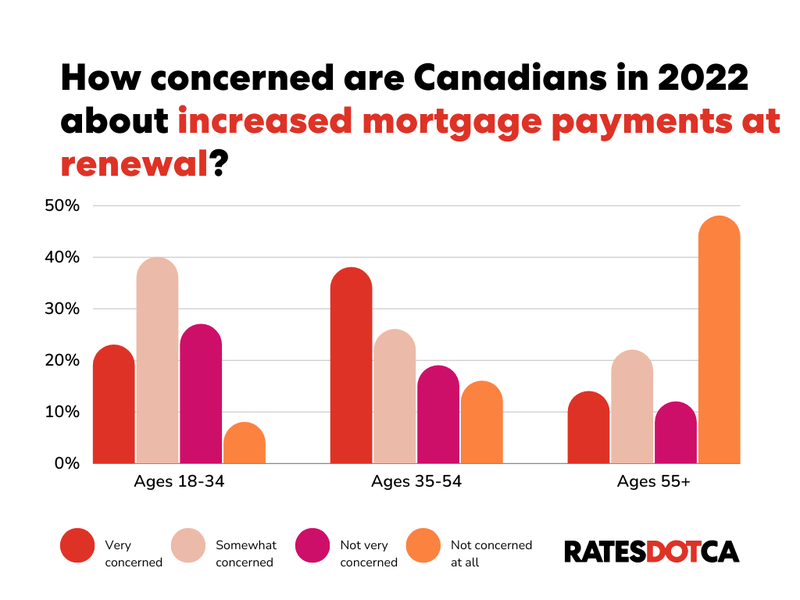 Most homeowners have a plan to accommodate increased monthly mortgage payments

52% of the respondents — particularly those who expressed concern — say they have a plan of some kind to deal with an increase in monthly mortgage payments.

For some (38%), that plan includes decreasing spending in other areas of their budget, while 9% plan on using their savings to make up the difference. Only 2% are considering taking on a loan to help with the increased costs, and another 2% plan to sell their home.

Of those surveyed, 16% say they don’t need a plan because they can easily afford the increase, particularly those in the older age (55+) demographic. This could be indicative of older homeowners being able to tap equity to pay for rising mortgage payments. It could also have to do with the fact that this demographic is likely to have paid down their mortgages since they’ve likely had them for longer and so their payments may be smaller.

More concerning, however, is that 20% have no plan at all.

Leaving money on the table: 51% don’t plan to change lenders upon renewal

The survey reveals that 51% of Canadian homeowners don’t plan on changing lenders when their mortgage comes up for renewal — and 9% weren't even aware that they could switch lenders to get a better rate.

When you renew your mortgage, you aren’t obligated to stay with your current lender. In fact, this is an excellent time to shop the market, especially since many people will be facing an undesirable rate at their next renewal.

That said, 13% of young homeowners (18-34) expressed concern over an increase in monthly mortgage rates upon renewal plan on changing lenders. However, 14% would like to change lenders but can’t pass the mortgage stress test, which is designed to ensure you can afford payments if interest rates increase in the future. The current qualifying BoC rate is 5.25% or two percentage points more than the rate being offered, whichever is higher. With both fixed and variable mortgage rates on the rise, many buyers are being stress tested at rates over and above 5.25%.

Another benefit of comparing mortgage rates is that it allows you to see rates from other lenders than just the big banks. For instance, credit unions, B lenders, private lenders, and even banks you don’t currently have an account with.

Depending on your financial needs, you may get a lower rate with a credit union without having to undergo the stress test. B lenders are another option if poor credit or income circumstances prevent you from qualifying with traditional lenders. However, you’ll face higher interest rates. Private lenders are unregulated, and while they offer mortgage loans irrespective of your credit score, they come with steep interest rates and should be approached with careful consideration.

November is Financial Literacy Month. Educating yourself on how mortgage renewals work and the options available to you is crucial. Comparing mortgage rates is one of the quickest and easiest ways to make sure you’re not leaving money on the table. This November, shop around for the lowest rate, even if you have an existing relationship with your current lender.