Which Toronto Neighbourhoods Have the Most Expensive Car Insurance Rates? 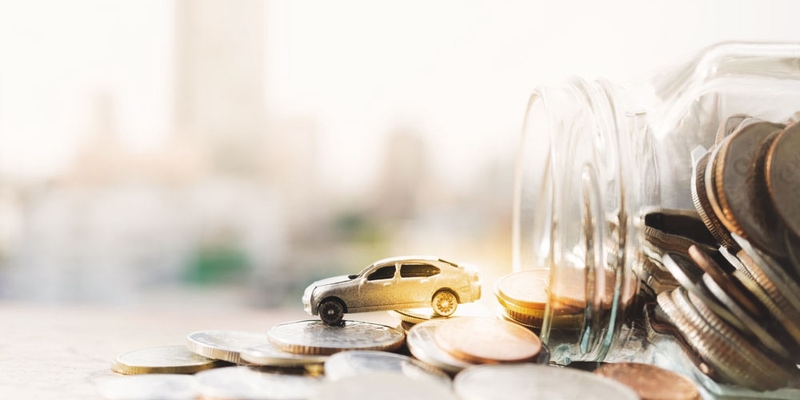 Living in Canada’s most populous city offers many noteworthy benefits – a high quality of life, countless job opportunities, access to top-tier universities and colleges, and a thriving cultural scene. But there’s also a downside: Torontonians are subject to paying some of the highest car insurance rates in Ontario.

How much you pay can vary significantly depending on which part of the city you live in, according to RATESDOTCA’s Insuramap, an interactive online map that lets you look up the average auto insurance rate across the city and province by postal code.

However, T.O. residents who live outside of the downtown core or in midtown may be paying as much as $1,305 more for auto insurance per year than their fellow Torontonians. Estimated premiums in some parts of Toronto range from $2,202 to $3,000 per year.

Where are the most expensive car insurance rates in Toronto?

With rates continuing to creep up despite the reductions and rebates offered by insurers in 2020 because of COVID-19, some Toronto drivers may be feeling the financial squeeze more than others.

Here are the most expensive areas in Toronto for car insurance: 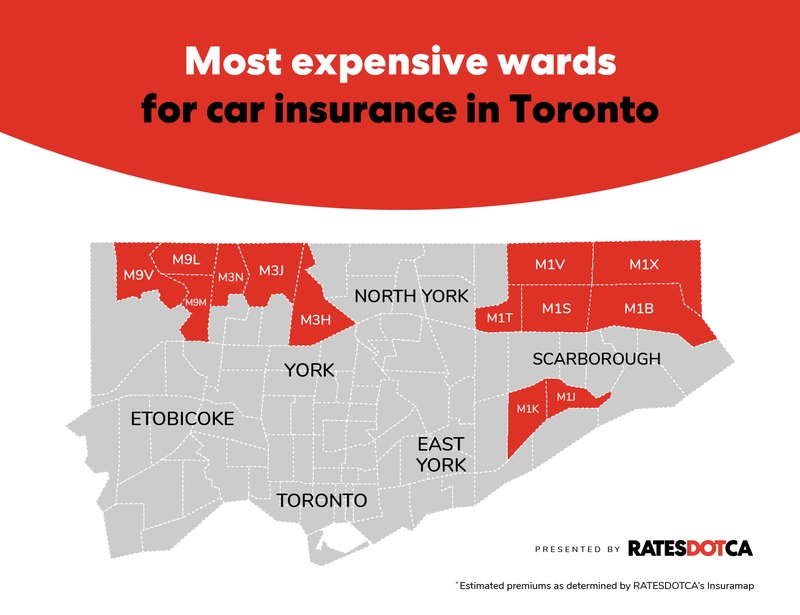 The rate estimates in Insuramap are based on a 35-year-old driver of a 2017 Honda Civic with a clean driving record.

Where are the least expensive car insurance rates in Toronto?

According to RATESDOTCA’s Insuramap, the cheapest car insurance rates in Toronto are estimated to be $1,695. Meanwhile, the rates in the city’s core and midtown are cheaper than those found on the north end of the city. One reason for this could be that residents who live downtown rely on their vehicles less than those living in Etobicoke, York, North York or Scarborough.

The city's Vision Zero Road Safety Plan 2017-2021 suggests that only 32% of residents who live in the city’s core or East York rely on a personal vehicle to get around. The rest take public transit (37%), or they cycle or walk (31%). For those living elsewhere in the city, however, driving more common: 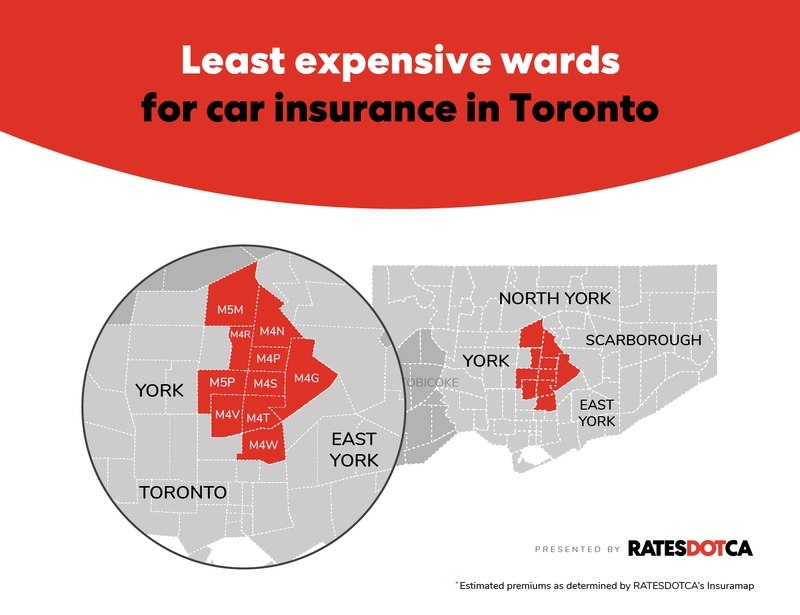 What influences the car insurance premium you get?

Where you live is one of many factors insurers weigh when calculating the rate you get. The other factors they look at include:

If you have a clean driving record (no at-fault collisions or traffic convictions for things like speeding or distracted driving), you may be wondering why insurance premiums go up each year. The answer is insurance premiums are based on what insurance companies assume they need to shell out to settle claims. That calculation is based on historical claims data. So, if there are a lot of claims in the part of the city you live, that tends to lead to higher rates. According to the Insurance Bureau of Canada’s (IBC) 2020 fact book, more than half of every dollar an insurer receives is paid out to settle claims, and insurers paid out $41.5 billion in claims in 2019.

Meanwhile, if provincial legislation called, “Ending Discrimination in Automobile Insurance Act 2019” (aka Bill 42), becomes law, insurers would no longer be permitted to use your postal code in their calculations when determining what you pay for coverage. Whether or not that unfolds remains to be seen.

There are many ways Toronto’s drivers can save money on their insurance premiums, including being a defensive driver and keeping your driving record free of traffic convictions and collisions.

There are other ways you might be able to lower your premium. Talk to your broker or agent about how you can do so and inquire about the discounts your car insurance provider offers for which you may be eligible.

Your Toronto car insurance premium could be lower

Regardless of which Toronto borough or neighbourhood you live in, if you haven’t put your current premium to the test by shopping around, you may be paying too much for coverage. Comparing auto insurance quotes at least once a year when your policy is up for renewal is undeniably one of the easiest ways to find out how much you can save. 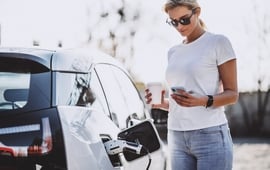 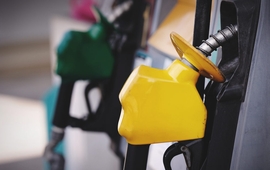 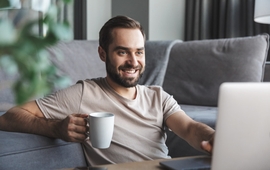