You are not the only safe driver on the road 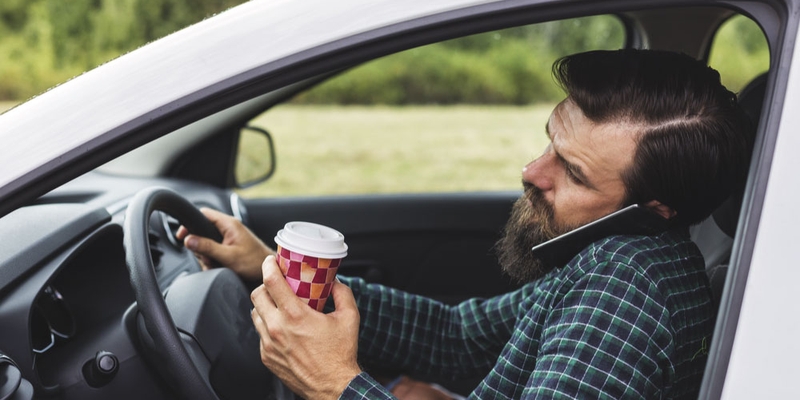 If that sounds like you trying to justify sending a ‘quick’ text or checking ‘just a few’ notifications while driving, you are not alone. According to the results of a Forum Research survey conducted in March 2021 on behalf of RATESDOTCA, one in four Canadian drivers (25%) admit to making phone calls while driving without using any hands-free or Bluetooth options.

Surprisingly, large minorities of Canadian drivers admitted to regularly engaging in even more dangerous distracted driving behaviours. One in eight (13%) said they regularly text or send instant messages from their phone while driving. And one in 30 might sound like a fairly low figure, but that was the proportion of drivers (3%) who admitted to watching videos on their phone while driving. Out of all the survey respondents, more than one in four (26%) admitted to engaging in distracted driving behaviours on a regular basis.

(On that last point, consider a little scary math: There are 35,742,412 registered vehicles in Canada, meaning 3% or 1,072,272 are being driven by people who watch videos while operating their vehicle. Of those roughly one million cars, 57% or 611,195 are being driven by people who believe it is safe to be watching a video while simultaneously operating a motor vehicle. That is comparable to every single car in cities as large as Winnipeg or Ottawa!

The same survey also found Canadian drivers consider distracted driving to be a greater cause of death on Canadian roads than impaired driving at 47% versus 34%.

That last result is downright perplexing. The only way it can be squared with such high proportions of drivers claiming distracted behaviours are safe, at least to me, is that millions of Canadians must subscribe to the “I can text and drive safely but other people cannot” stereotype. However, I welcome other potential explanations in the comments section below.

Results differ greater by province (and in one instance, by gender)

Easily one of the most beautiful drives you can take anywhere in the world is heading eastbound along the TransCanada Highway from Vancouver to Calgary. Once you pass Golden, B.C. and cross into Alberta, however, be warned that your risk of encountering someone texting while driving nearly triples from 7% in B.C. to a chart-topping 19% in Alberta.

Quebec deserves to be called out for pulling up the national average of drivers (25%) who make calls without a hands-free option. Fully 36% of drivers in La Belle Province said they regularly take their eyes off the road (and at least one hand off the wheel) to initiate or receive a phone call.

No other province or region in Canada is even close, and the rest are all below the 25% national average. Ontario was a distant second, with 23% of drivers admitting to making non-hands-free calls. Alberta tied with the Atlantic region for third place at 22%, British Columbia was lower at 18%, but ultimately Manitoba and Saskatchewan were the most impressive with only 12% of drivers making calls.

Put another way: Quebec drivers are fully three times more likely to make calls without any hands-free or Bluetooth options than drivers in Manitoba and Saskatchewan.

The vast majority of drivers are uncomfortable when, as a passenger, they witness the driver engage in common distracted behaviours such as making calls or sending texts. More than eight in 10 respondents said those activities made them either ‘somewhat’ (30%) or ‘very’ (51%) uncomfortable.

Despite such widespread levels of discomfort, close to half (43%) of passengers who noticed distracted driving behaviour at least once did not attempt to tell the driver to stop. The disparity suggests passengers fear drivers will not react well if they are rebuked, but those passengers should note that three in four drivers across Canada said they wouldn’t object if their passenger asked them not to engage in distracted driving habits.

Most people only think of the upfront cost of tickets, fines and penalties that come from being pulled over for distracted driving by law enforcement. Those can be substantial, ranging as high as $5,000 depending on where the offence is committed in Canada.

Anything that takes the driver’s attention away from operating the vehicle is considered distracted driving. While texting or watching videos account for the most egregious examples, everything from changing the radio station to reaching for a cup of coffee also qualifies.

The Third Annual Distracted Driving survey was conducted by Forum Research between March 10 and 12, 2021 and polled 1001 respondents across Canada. The sample's age ranged from 18 to 65+ years old. The margin of error for this study is +/-2.5%, 19 times out of 20. Respondents have a driver's licence. Survey questions were presented via telephone, and respondents provided answers through their mobile device or home phone touchpad.