Nearly 40% of homeowners are concerned about their finances, half of whom bought during the pandemic: survey 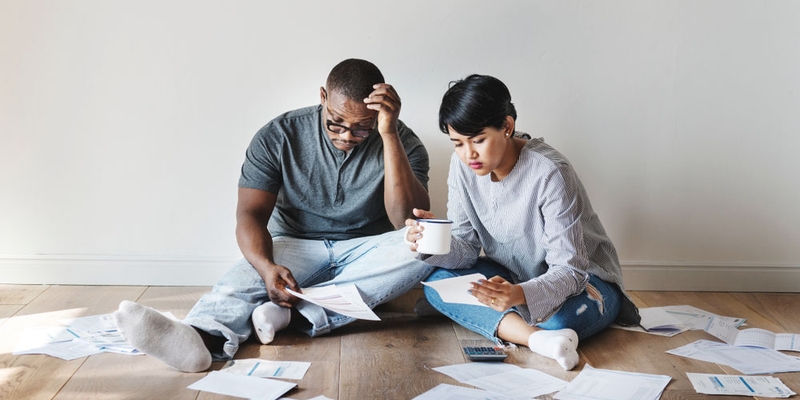 The Canadian real estate market saw a record number of transactions over the last two years. While listings slowed at the onset of the COVID-19 pandemic, it wasn’t long before low-interest rates, and excess savings sent demand — and home prices — through the roof.

In 2021 alone, 666,995 residential properties exchanged hands via Canadian MLS® Systems, according to the Canadian Real Estate Association (CREA). That’s 20% more sales than the previous annual record set in 2020 and 30% more than the average of the last 10 years.

But the rock-bottom mortgage rates couldn’t last forever. The Bank of Canada made its first move, raising rates to 0.50% in March and then, in its April announcement, to 1%. With more hikes on the horizon, home sales are starting to fall. The sales-to-new listings ratio eased to 66.5% in April, a level not seen since June 2020. “This reading is right on the border between what would constitute a seller’s and a balanced market,” the CREA reported in a May release.

This transition might delight hopeful homebuyers, but many existing homeowners are concerned, according to a recent Leger survey conducted on behalf of RATESDOTCA and BNN Bloomberg in May.

While most homeowners (61%) are not concerned about their finances, 39% say they are concerned, and 18% admit to being very concerned.

Some newer homeowners might be feeling buyer’s remorse. Of the concerned homeowners, 50% bought their homes less than two years ago.

Income, age, and experience may play a role here. Younger Canadians (aged 18-34) are more likely to say they are concerned. Sixty-two percent of this age group are also first-time homebuyers.

Whereas those aged 55 and older are more likely to say they are not concerned. Sixty-four percent of this segment have purchased property before but currently own one primary residence.

Most Canadians save some monthly income, but not a lot

Nearly three-quarters (73%) of Canadian homeowners say they can save some of their monthly income; however, few can save more than 10% — a common savings target recommended by financial experts.

Inflationary pressures from rising food and gas prices might be contributing to this divide. A recent BNN and RATESDOTCA survey suggests that 58% of Canadians adjusted how they drive because of fuel costs. Still, many people without access to public transportation rely heavily on their vehicles to get around and can’t escape these expenses. 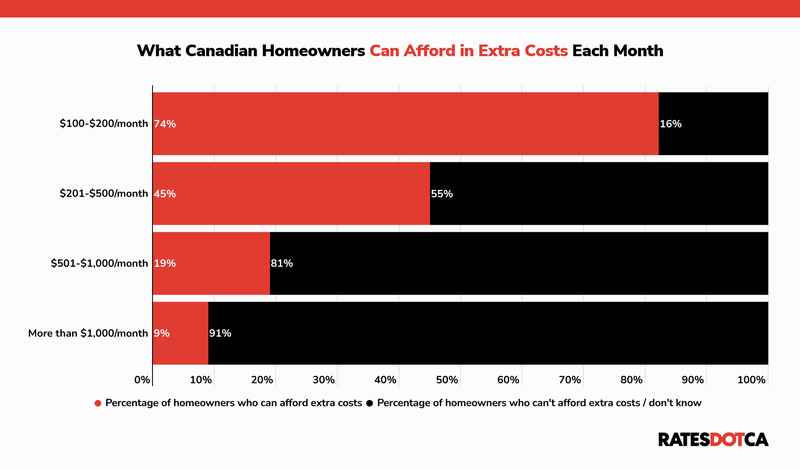 Last month, inflation hit a 31-year high of 6.8%, and Canadians are feeling the pinch. From groceries to gas, heating and travel, everything costs more, which is adding to the cost of homeownership. But affordability is waning, and many homeowners may soon reach their limit.

While 74% of homeowners could comfortably afford some extra costs each month (about $100-$200), fewer than half (45%) believe they could manage up to $500 more. Few could afford more than that, and 15% say they couldn’t afford to pay for any extra costs.

For homeowners with variable mortgage rates, a tight monthly budget could cause concern as interest rates are projected to exceed pre-pandemic levels by the end of the year. Switching to a fixed mortgage rate could reduce the risk of missing a payment and avoid uncertainty. However, for those that can tolerate more risk, a variable rate might help them score a lower rate.

If you are ready to purchase a home, compare mortgage quotes online to get the best rate. Or speak to a RATESDOTCA mortgage broker to get answers to your mortgage questions. 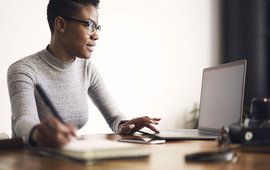 The recent Bank of Canada rate hikes are one of many factors to consider before renewing your mortgage early.
Learn More
5 mins read