Are Canadian Students in Debt Denial? 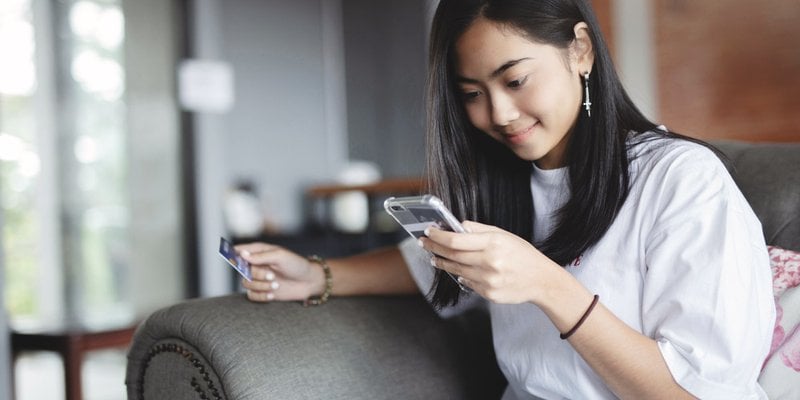 How much debt danger are Canadian students in? As young adults across the country head back to campus, the issue of students' cost of living - and the loans they'll require - is a national discussion.

It's argued that steep tuition sets young adults up for decades of debt repayment - up to 14 years for the average grad, according to our 2012 Cost of the Future study - and that millennials are effectively delayed from reaching the financial milestones enjoyed by previous generations.

Now, it's reported that consumer debt levels are a growing concern for this group. A recent piece in the CBC states credit card debt has spiked among students over the past five to 10 years, heaping thousands in interest on top of already massive student loans. And we've all heard the cautionary tales of students who sign up for cards marketed directly to them, right on campus.

However, this conflicts with reports that students are eschewing credit cards altogether - a recent American study commissioned by Bankrate and compiled by Princeton Survey Research Associates International found 63% of millennials don’t carry a credit card at all, while another survey found pre-paid credit card use is growing in prevalence among students.

So, what's the real story on student consumer debt? To find out, we asked 820 Canadians born between 1990 - 1996 about their debt perspectives.

Check out the results:

Of the respondents polled, 42.5% indicated they don't have credit card debt at all, compared to 18.4% reported for all age groups.

When asked what form of debt most troubled respondents, 39.7% said student loans were their greatest source of debt stress. This was followed by credit cards at 29.7%, and lines of credit (6%). As well, just over half indicate they aren't comfortable with their debt levels (51.2%).

Are Students in Debt Denial?

Here's where things get interesting - it turns out, those in the student age group are in better financial shape than they think.

Of those who think they carry more than the national average (11.5%), only 31.6% actually do. By contrast, those who believe they carry less credit card debt than average (59.8%) are overwhelmingly correct at 93.6%.

How Students Can Stay in the Black

The numbers are encouraging, but it's important for students to be prevalent about protecting their finances - and their future credit scores. Here are a few tips for scoring that diploma without unnecessary debt.

Your credit card isn't extra income: Don't treat your card like it's free money. Instead, consider it as a loan from your future self (with a big cut going to your bank for the convenience). Using credit to make purchases you don’t have cash funds for is the quickest way to build up a balance that's too big to handle. 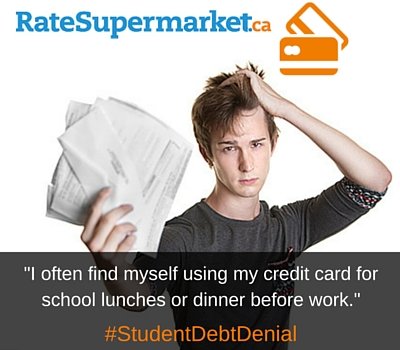 Beware impulse purchases: Dining out and impulse purchases topped students' reasons for going into unnecessary debt. "I often find myself using my credit card for school lunches or dinner before work," stated one respondent. 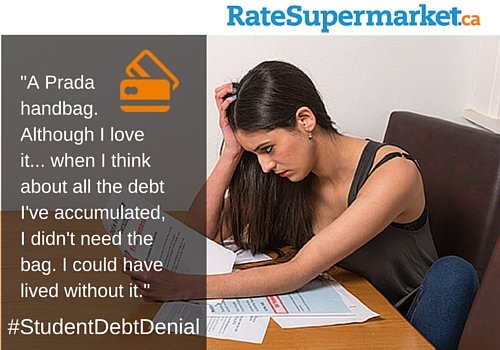 Another admitted a Prada handbag was the reason for her debt downfall: "Although I love it... when I think about all the debt I've accumulated over the past few years, I didn't need the bag. I could have lived without it."

Interestingly, post-secondary education also made the list of regrettable reasons students went into debt: of the 19.2% who said they went into debt for unworthy reasons, 13.2% said school had been an unnecessary expense. 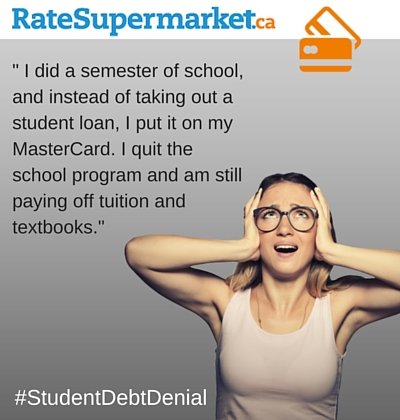 Avoid a balance at all costs: Using a credit card during your college years is an effective way to build a credit history - but only if you use it properly. Pay off any purchase made on the card immediately to reap benefits such as rewards and credit building, and avoid paying interest.

Understand the consequences: Racking up a big balance goes beyond big monthly payments - it can cause lingering damage to your credit score. Beware going above one-third of your credit limit - doing so raises a red flag to credit bureaus and impacts your score, which can limit your borrowing options later in life.

Seek out a student-friendly option: 49% of respondents indicated they preferred a rewards credit card - but this card type isn't the most student-friendly option. Such cards often come with annual fees - an unnecessary expense for the budget-strapped. Effective rewards earnings also require regular card use, and immediate balance payoff - a habit that may be too tempting for those lacking financial discipline. A no-fee option, or competitively lower interest rate, may be a student's best bet.