Nearly 70% of Canadians consider repair and replacement costs when buying a vehicle: survey

According to a recent Leger survey conducted on behalf of RATESDOTCA and BNN Bloomberg in April, most Canadians scrutinize costs like possible repairs and auto insurance. However, many will have to adjust their budgets due to availability or high prices.

Rising gas prices and access to public transportation may be driving urbanites to take the subway, while many others might have the privilege of parking their wheels and working from home. Unfortunately for those in the market for a car, supply chain issues are creating months-long wait times for new vehicle orders.

With demand outpacing supply, buyers are also facing a shortage of used vehicles. As of early April, the average used-car price in Canada was slightly below $37,000, according to Canadian Black Book. In some cases, the price tags for used cars are equal to that of new cars.

The survey sought to understand how these challenges influenced Canadians’ car-buying decisions.

Some car buyers will have to make concessions

While most Canadians say they will stick to their plans, many will have to make concessions due to the current market. Sixty percent of Canadians assert that they spent or will spend within their budget; however, many (43%) have made or will make adjustments to their plans.

In fact, 13% said they delayed or would need to delay their purchase due to high prices, while 12% cited availability issues as their reason. Meanwhile, some buyers changed (or expect to change) their choice of a vehicle because of cost (12%) or availability (9%).

Even though Canadians seem open to compromise, vehicle safety and insurance implications are of the utmost importance. 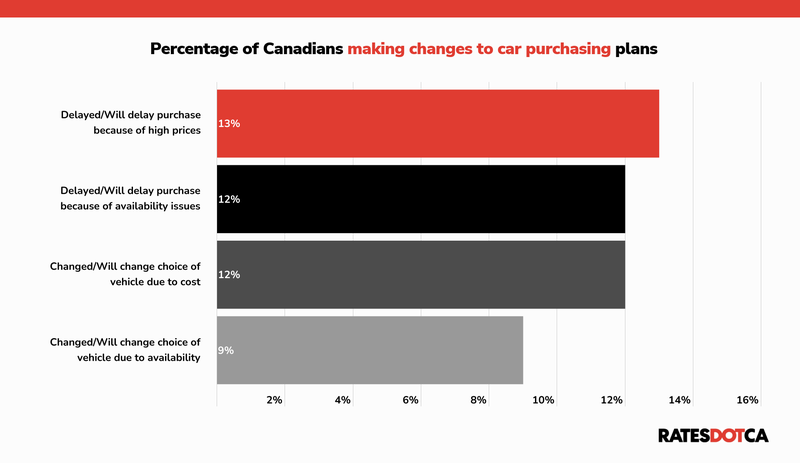 Despite the lack of choice they have, Canadians are doing their research before car shopping, factoring in overall safety as well as potential risks, such as the likelihood of theft.

Two-thirds (68%) say they will consider the repair and replacement costs when purchasing a car and how it might impact their insurance premium. This factor is most important to those planning to buy a new or used car, at 73% and 76% respectively. In fact, 59% of those who recently bought a new car and 62% who purchased a used car reported being influenced by these details.

Six-in-ten (61%) will consider a vehicle’s safety record or crash rating before buying, while about half will look at the likelihood of accident or theft. Women are more likely to compare all the factors considered in the survey than men, especially regarding crash rating and the probability of an accident.

The survey found that at least two-in-ten respondents were unaware these factors can alter insurance rates. 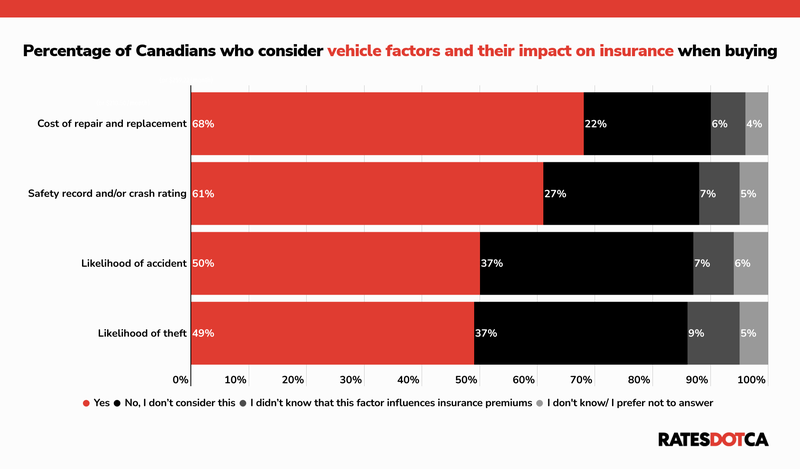 How your vehicle influences your insurance premium

Auto insurance providers use many factors to determine the premium you pay, including details about your life (e.g., age, gender, home address) and driving experience — essentially, components that determine your likelihood of filing a claim. Your car also influences your rate because different vehicles carry varying claims risks.

Each year, the Insurance Bureau of Canada (IBC) records and analyzes the cost of insurance claims by vehicle make and model using the Canadian Loss Experience Automobile Rating (CLEAR) system. The rankings are broken into four categories:

Industry experts use CLEAR numbers to assess how likely a specific vehicle will be involved in a claim and the cost of damage and any injuries sustained. The data comes entirely from actual insurance claims.

Curious car buyers can also access the CLEAR results on the IBC website to see each vehicle’s rating. A green colour indicates positive rankings, or a lower claims risk, whereas a yellow or red colour indicates negative rankings, or a higher claims risk. Large vehicles, such as pickup trucks, often perform well regarding accident benefit claims; however, many are also popular targets for theft.

A positive CLEAR number could result in a lower auto insurance premium. It is important to note, however, that rankings can change annually. Compare auto insurance quotes upon renewal to ensure you pay the best possible rate.