What Auto Theft Prevention Devices Should You Use? 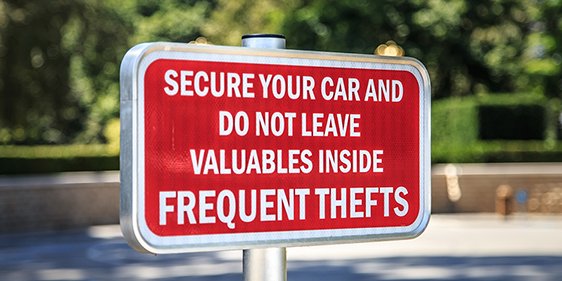 If you think you have a sweet set of wheels, there’s a good chance someone else does too — that’s why it’s never a bad idea to augment your ride with theft prevention devices.

The make and model of your vehicle already affects your car insurance rate and having a theft prevention device installed in it can as well.

Among the facts to consider are a vehicle’s price, safety rating, and the model. They all help insurers determine what premium you’ll pay.

More expensive luxury vehicles or those with a lot of added features command higher premiums because they’ll be more expensive to repair, which means you’ll need higher coverage maximums to cover any claim.

Cars with better safety ratings will save you money on insurance because they’re less likely to get into in accident and cost less to repair. A sportier car is considered a bigger risk because owners are more likely to drive faster and be involved in a collision, while soft-top convertibles are easier to steal.

Your car may be an attractive model

Some cars are more popular with thieves, and because they are frequently targeted, they cost more to insure. In 2020, Honda and Lexus dominated the top 10 list of stolen vehicles in Canada, according to the Insurance Bureau of Canada, although theft popularity can differ by province. Pickup trucks are particularly popular with thieves in Alberta, for example. One of the reasons Lexus makes the top 10 list in Canada is in part due to keyless FOBs, as thieves are tech-savvy and use radio frequency amplifiers to steal cars out of a person’s driveway.

However, it’s not always the entire vehicle you have to worry about being stolen. There are specific parts that are worth a lot to a car thief, so you may find something missing from your vehicle. This past year, the Ontario Provincial Police (OPP) reported a spike in catalytic converter thefts across the province. The component contains precious metals that make them worth US$500 or more.

People steal cars for different reasons, so even if you don’t own a vehicle that makes the top 10 list, it could be appealing for a thief, if only because they need a car and happen to see yours first.

What are your auto theft prevention options?

There are several ways you can better secure your vehicle to deter thieves, whether it’s by making the vehicle difficult to physically move or raising an alarm when the attempt is made.

Probably the most familiar of all physical impediments to driving the vehicle is the steering wheel lock. The most popular brand is The Club, which locks onto the steering wheel with one pull. Not only is it resistant to sawing and hammering, and even freon attacks, The Club has three laser encrypted keys that cannot be duplicated.

An alternative to securing the steering wheel is a security tire clamp, a very visible option that wraps around your wheel to prevent theft attempts without scratching or damaging your wheel rims.

Aside from securing your vehicle’s tires or steering wheels, you could opt for a brake lock that fits around the brake or clutch pedal of your car, making it impossible for the pedal to be used until the lock is taken off. It can also be attached to both the steering wheel and brake, making it difficult to use the brake or steer the vehicle.

Some cars have alarms built in, but if you don’t have one you can install a wireless anti-theft security alarm on the inside of your door using a double-sided sticker or tie it with a strap. A very loud alarm will go off should a thief try to break into your vehicle. Similarly, you can add a keyless entry security alarm system that works with your key FOB at a distance of up to three metres. Plus, it doesn’t hurt to install a tracking system if your vehicle doesn’t have one that uses wireless or GPS technology to emit a signal to the police or a monitoring service of your vehicle's location.

But you don’t necessarily need to install an alarm system to deter thieves. Another approach is to adorn your vehicle with anti-theft alert signal and decals. This less expensive fake alarm box with flashing lights and stickers will trick thieves into thinking your car is decked out with an active alarm system and hopefully dissuade them from even trying to outsmart it.

While there are many theft prevention devices to choose from, they aren’t the only means of reducing the likelihood of vehicle theft.

Good habits can help reduce the risk of theft

Adopting good habits can also reduce the chance of your car getting stolen such as:

Even if you follow these habits and install a theft prevention device, you can still fall victim to a car thief. If your vehicle is stolen, you need to contact the police and your car insurance company immediately.

No one wants the stress that comes with having a vehicle stolen, so it’s worth taking the time to investigate your options for investing in theft prevention devices. Your insurer may even give you a discount on your premium because of your efforts.