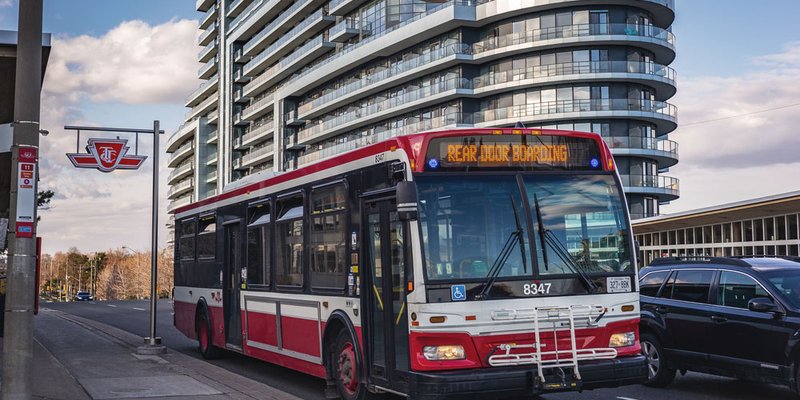 If you’re seeing red on lanes painted on streets in the Eglinton transit corridor, you’re not alone.

The red lanes officially go into service on October 11. The goal is to improve transit service in the TTC’s most heavily used bus corridors. Any motorist driving or stopping in the red lanes may end up with a $130 fine if stopped by police.

If you see a solid red lane along the priority route, it means buses and bicycles are allowed to use the lane, but not vehicles. A dashed or spaced out red lane means vehicles may use it if they are preparing to turn into an intersection, driveway, or side street.

Although no dates have been set yet, five other fast-track corridors will be installed along some of the TTC’s busiest routes, including Jane Street from Eglinton Avenue West to Steeles Avenue West, Dufferin Street from Dufferin Gate to Wilson Avenue, Steeles Avenue West from Yonge Street to Pioneer Village subway station, Finch Avenue East from Yonge Street to McCowan Road, and Lawrence Avenue East (east of Victoria Park to Rouge Hills Drive).

“Installing priority bus lanes as soon as possible on the Eglinton East corridor will help us quickly improve access and mobility for Scarborough residents, help manage congestion, shorten travel times, and improve transit reliability so that residents are even more confident they will get where they need to be on time,” said Toronto Mayor John Tory in a press release.

For drivers, the Eglington corridor bus lanes may represent an impediment, but the COVID-19 pandemic has seemingly shifted the allocation of road right-of-way space in the city toward public transit priority lanes, bike lanes, and sidewalk patios. These latest measures follow Toronto’s King Street priority transit corridor that restricts vehicle traffic between Bathurst and Jarvis Streets in an effort to reduce traffic congestion, and improve transit reliability and road safety.

The recent installation of automated speed enforcement cameras in Toronto’s community safety zones (residential areas with schools and seniors residences, for example) are another measure the city hopes will enhance road safety.

Although no demerit points are issued if you receive a photo-radar ticket in the mail for speeding past one of the automated cameras, it will not go on your driving record, and there is no insurance implication.

However, accumulating speeding convictions in general, or amassing several convictions for driving in a transit-only lane may affect what your car insurance premium is.