Study Examines Cost of University in Canada: $19,500 Per Year

A post-secondary education is quite the investment – close to the tune of $20,000 per year in fact.

A recent study conducted by Macleans found the average cost of a university education per year in Canada is now a whopping $19,498. The study enlisted 23,384 students to find out how they pay for post-secondary education and where they spend their money. And while it may come as no surprise that on-campus living is more expensive, the study found that students who move away for school spend almost $20,000 per year, in comparison to students who live at home and spend $9,300 a year on average.

The survey discovered life at certain universities to be particularly expensive. The average yearly spend for a student enrolled at the University of Toronto living off campus was $23,485, while a student at Ryerson can expect to spend $23,066.

Third on the list was Saint Mary’s University in Halifax, where the average annual outlay was calculated at $22,892. The University of Regina ($22,745) and the University of British Columbia ($22,217) completed the top five most-expensive universities.

At the other end of the scale, the lowest costs were enjoyed by students who stay at home and attend Université de Sherbrooke, as they can expect to spend $4,284 a year. Two other Quebec-based schools, Bishop’s University ($5,983) and Université Laval ($6,491), also offered students lower annual average costs relative to the rest.

Predictably, rent turned out to be the biggest cost for most students who took part in the survey.

When broken down, accommodation accounted for 40% of the average annual student budget, followed closely by tuition (34%). Groceries accounted for 8% of the average student’s yearly spend, while 4% went to books and course material, and 4% was spent on travelling home to visit family and friends. And though students have traditionally been known to be avid party animals, it’s maybe time for that perception to change: only 3% went towards alcohol.

Although the cost of course materials may appear to be a small percentage of the average student spend, it added up to a total of $773 on average per year. Business ($874 per year), Criminology ($843), and Psychology ($827) proved to be the most expensive courses in terms of money spent on books, while Computer Science ($578), Math ($628), and Science ($675) were the least expensive. 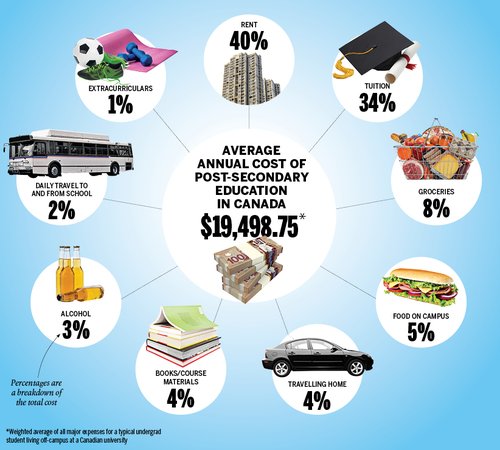 And while off-campus students may save a bit on housing, on-campus food seems to be a significant cost. Five per cent of an off-campus student’s spend goes towards food on campus – that 5% totals around $25 a week, which adds up to about $900 over the course of the school year.

On the other hand, students who live at home have clearly been taught the value of meal planning by mom and dad as 10% claimed they spend nothing in the campus canteen each week. Others aren't so savvy: 29% spend $10 to $24 on campus each week, 19% spend $25 to $49 per week, and 2% spend a mind-boggling $100 or more per week on campus food.

Students not really reliant on bank of mom and dad

The study also examined how students get the money to pay for their education, accommodation, tuition and all the rest.

However, students aren't completely reliant on the bank of mom and dad, however: almost half said they used personal savings and earnings to pay for a small amount of their school costs, 11.5% said they paid for about half of their school expenditures by themselves, and 4.4% reported being completely self-reliant and paying for everything out of their own pocket.

This supports the view expressed in a global study by HSBC that on an international-scale, Canadian students are some of the most likely to pay their way through post-secondary school, or at least contribute to it. According to that study, about 42% of Canadian students helped to pay the tuition for their own post-secondary education, in comparison to 15% on average globally. Student loans also play their part, with 5.9% saying they used a student loan to pay for everything. One out of five are using a loan for most expenses, and 11.4% are using their student loan to pay for around half of their yearly costs.

How students can save money

Saving is no easy task. Especially when you have student loans to think about. So no matter what your major is, it’s best to get educated on budgeting as soon as possible.

The first step is to create a spreadsheet with all your regular expenses for a month, including food, toiletries and other necessities. Don’t forget to account for any activities or evenings-out.  Once you’ve added everything up, subtract it from the amount of money you have, and see how much is left. You should be able to divide that leftover amount between debt and savings.

Even if it’s a small amount, try to keep up with a regular cycle. If you’re finding that you spend more than you have – or are making from a part-time job – the next step is to find ways to cut back on certain expenses.

Getting a student credit card can save you money

If you already have a credit card, make sure you don’t miss any minimum payments and if possible, always pay off your balance in full. This will help you build a credit history for when you begin to make large purchases, such as a car or a home

But if you don’t have a credit card, compares the best cards in Canada that are geared towards students and will fit your financial needs. For example, the BMO SPC® CashBack® Mastercard® won Best Card for Students at the 2017 Best of Finance Awards.

Not only do you get SPC discounts (Student Price Card Ltd.) of 10% to 15% at hundreds of your favourite stores, but there is also no annual fee, and you get one per cent cash back on all card purchases. And for a limited time, if you sign up today, you can get up to $60 cash back and be entered into a contest for a chance to win free tuition and books for a year. Sixty dollars may not seem like much in the face of $20,000 per year, but it can buy a few on-campus pizzas or groceries.