When mortgage rates dive one percentage point—as they did over the last year—it generally means clouds are forming on the economic horizon.

This sort of drop in the five-year government bond yield, plus a negative yield curve (which usually portends recession), generally results in rates staying down for a while. In fact, rates are usually lower five years following such occurrences.

This is especially noticeable for folks putting down less than 20%. Such “high-ratio” purchasers, as they’re called, must prove they can afford a payment based on Ottawa’s prescribed “qualifying rate,” which is 5.19%.

The trouble is, market rates have dived but Canada’s qualifying rate has barely moved. For profit and other reasons, banks refuse to drop their five-year fixed posted rates — which determine the qualifying rate.

Back in October when mortgage rates peaked, actual five-year fixed rates were as low as 3.28%, but the qualifying rate was 5.34%. In other words, mortgage applicants had to prove they could afford a rate that’s 2.06 percentage points higher.

Today, actual rates are much lower (as low as 2.25%) while the qualifying rate has barely budged at 5.19%. That’s a far bigger 2.94 percentage-point shock absorber, despite arguably less rate and default risk.

As the B.C. Real Estate Association (BCREA) pointed out this week, market rates don’t guide five-year posted rates like they used to. The correlation has completely broken down, as you can see in their chart below. (Source) 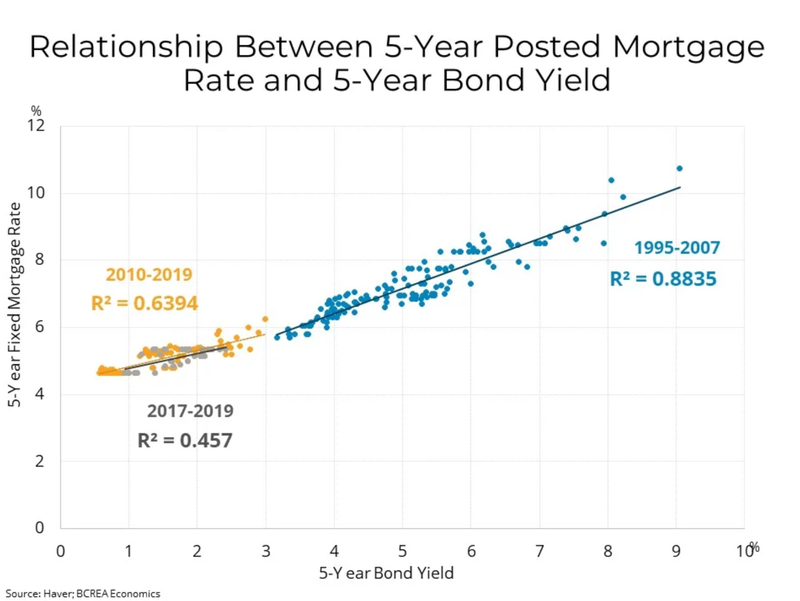 As a result, and given its mediocre 1.8% Canadian growth forecast, BCREA says, “Our base case is therefore for the qualifying rate to remain unchanged over the next year.”

We’d be shocked if the qualifying rate didn’t change for one year, but the way banks are doctoring their posted rates nowadays, nothing would be surprising.