Putting the Rise in Consumer Insolvencies in Perspective

Canadians are more delinquent, according to Equifax, both with their mortgages and non-mortgage debt.

The number of Canadians who were 90+ days behind on their non-mortgage debt payments rose 9.7% year-over-year to 1.15% in the third quarter. And while still low, mortgage delinquencies crawled up by 6.7% to 0.18%.

The situation isn’t yet dire, however. Not according to a report by economists Benjamin Tal and Avery Shenfeld of CIBC.

“On the surface, the acceleration in the year-over-year percent change in the number of insolvencies looks fairly dramatic, but that’s from very tame levels,” they write.

Of course, tame can and does become untamed—if there’s an underlying catalyst.

“On a per-capita basis, we’re neither climbing as steeply nor as far as in the last recession, and unlike the 2008-10 period, most of these insolvencies are now ‘proposals’ to restructure debt rather than outright bankruptcies.” 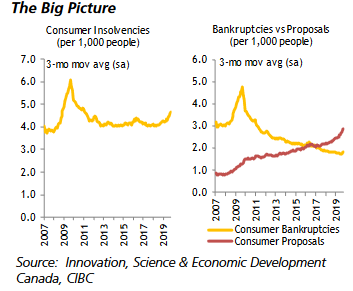 Because of that second point, losses for financial institutions haven’t spiked to the same degree as insolvencies since legal costs and losses for consumer proposals are lower for lenders compared to bankruptcies, they claim.

But we’re not one to sugarcoat the numbers. The fact is, delinquencies are an economic negative regardless, and consumer proposals leave lenders with only one-third of their principal on average. So creditor losses are material if delinquencies spike, bankruptcies or not.

Also concerning is that the share of consumers with “low” credit scores—below 680—rose over the past year. Albeit modestly…so far.

Mortgages comprise the largest segment of outstanding household credit—nearly two thirds of it. And thankfully, Canadians by and large are doing a good job of keeping up with their mortgage payments.

“For all the headlines about Canadians binging on mortgage debt in a long housing boom, that’s not where the problem lies,” Tal and Shenfeld wrote. “Arrears on mortgages have trended steadily downward, while arrears and delinquencies on other forms of credit are starting to edge higher.” 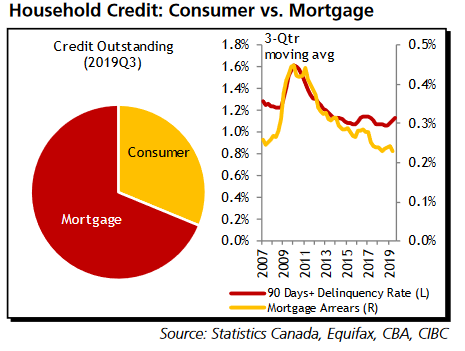 There are two key reasons for this, as noted in the report:

Either way, a ½ to one-percentage-point jump in unemployment could push up delinquencies noticeably.

The Role of Interest Rate Hikes

One of the trends evident in the Equifax data is that delinquencies have been rising predominantly in products that are sensitive to interest rate increases, like personal lines of credit and home equity lines of credit (HELOCs).

Notably, this delinquency climb took place over the last couple of years. That was coincident with the Bank of Canada hiking its overnight target interest, which led to the prime rate rising from 2.75% to its current 3.95%.

On a positive note, Tal and Shenfeld noted credit providers appear to be “taking the lessons learned to heart, with interest rate sensitive products seeing essentially zero growth on a year-on-year basis.”

Banks are also setting aside more money for future losses than they have in decades. It seems lenders and banking regulators sense that today’s low delinquency rates won’t last much longer.