Mortgages Up. Delinquencies Up

Mortgage lenders had a tough start to 2019 with higher interest rates and the government’s stricter mortgage rules (“stress test”) taking a bite out of mortgage volumes.

But things are looking up. As of the latest CMHC data from second quarter 2019, the number of new mortgages jumped to 222,000.*

That’s an 8.2% increase from the previous year. i.e., a big number, historically.

Unfortunately, the same data shows fewer people are paying their mortgages on time. But only slightly. The number of delinquent borrowers rose two basis points to 0.30% of all mortgage loans in Q2. Home Equity Lines of Credit (HELOC) delinquencies also rose two basis points, but still remain low at 0.17%.

If you’re a housing watcher, you’ll want to keep an eyeball on unemployment. As the jobless rate climbs, so will mortgage delinquencies. And we just saw the biggest surge in unemployment in a decade.

Across the country, people are borrowing more.

But only HELOCs and mortgages showed a significant rise in monthly obligations compared to previous years. 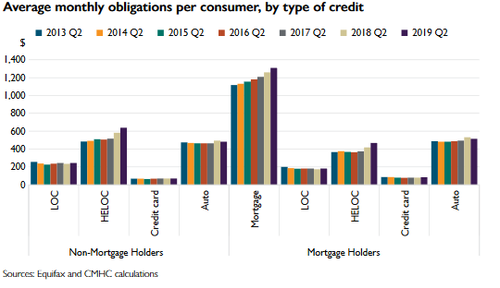 If unemployment keeps climbing, you can bet the ranch people will start tapping their HELOCs more. That’ll be another trend to watch.

On the face of it, most Canadians appear to be improving their credit.

CMHC says average credit scores rose across the board from the previous quarter, and were highest among consumers with a mortgage.

A full 80% of consumers either maintained or improved their credit scores compared to the previous year, CMHC claims. “This holds for both those with or without a mortgage, boding well for consumer credit health,” it noted.

“We are using a consistent time series…[so]…it is likely an indication of people handling their credit better,” says CMHC.

But Equifax data from last November paints a slightly less rosy picture. Equifax found that from 2008 to 2018, most people’s credit scores declined. The credit metric Equifax used was different than CMHC, however, and didn’t include mortgage payment history, among other things.

Among the other trends unearthed by the report:

* This 222,000 number includes purchase, switch and refinance mortgages. It does not include people renewing with their existing lender. CMHC says it only includes lenders who report their mortgages to Equifax (i.e., it omits a small percentage of mortgages). The total amount of new mortgages in Q2 2019 was $233 billion, according to CMHC.