The Mortgage Renewal Trend Has Changed

With fixed rates falling to multi-year lows in 2019, many mortgage renewers this year have been pleasantly satisfied with the rates they got.

Nonetheless, data from the Bank of Canada shows that the typical household renegotiating a mortgage this year locked into a rate that was 35 basis points (bps) above their previous rate, on average.

To put that in perspective, a homeowner renewing their mortgage at a rate 35 bps higher would be paying over $1,600 more per $100,000 of mortgage over a five-year term. That’s a monthly payment hit of $17 per $100k of mortgage, give or take.

“However, these [mortgage rate] increases have been diminishing throughout the year, peaking at 80 basis points in January and falling to just 10 basis points in August,” the BoC noted in its latest Monetary Policy Report. So basically, current renewing borrowers are roughly even-Steven with the rate they got five years ago (actually, today’s 5-year rates are a bit below November 2014). 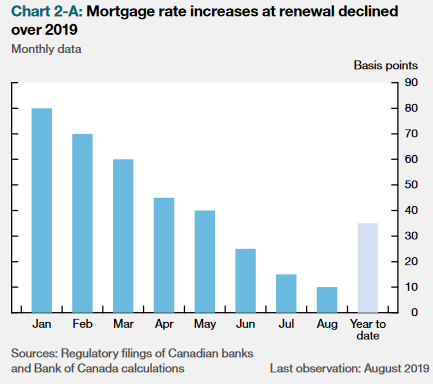 That said, the rate changes renewers have faced vary greatly with the type of mortgage. A variable-rate mortgagor renewing into a similar variable this year has endured a 65-bps rate increase on average, the BoC said.

“This resulted in a noticeable shift away from variable to fixed-rate mortgages,” it added.

The following graph illustrates just how much borrowers have been moving away from floating rates. The share of variable-rate takers has basically been cut in half, falling from 30% to 16% for renewers overall. 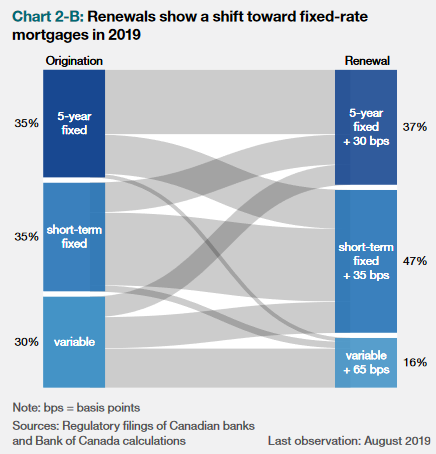 One can speculate as to some of the reasons for this:

If mortgage rates were to remain near current levels, the Bank of Canada says mortgage holders renewing in 2020 and 2021 should not face materially higher rates.

For existing five-year fixed borrowers renewing in 2020 and 2021, the Bank says, “these households would face rate increases of only about 10 and 25 basis points, respectively.”

But even that may not happen. With Bank of Canada signalling greater odds of a rate cut than a rate increase, some see the prospect of higher rates over the next few years as growing dimmer.

“Overall, mortgage debt-service ratios at renewal are likely to continue to decline on average,” the BoC report concluded. For an economy so dependent on consumer spending, that'd be a good news story.

Stat du jour: According to the BoC, about 20% of households made mortgage prepayments in 2019