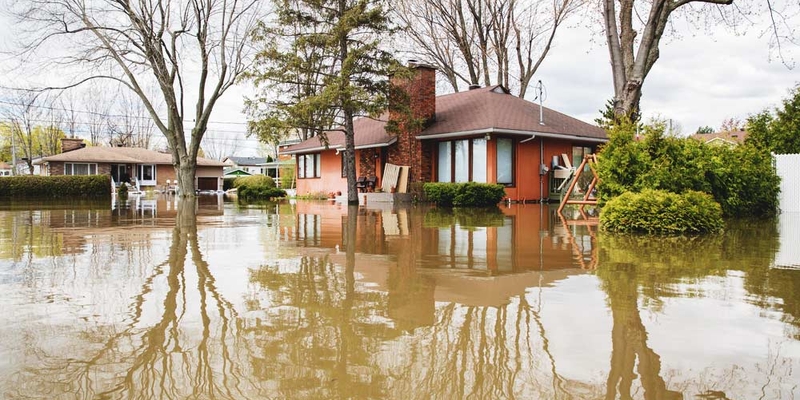 Over the past few years, we’ve seen consistently extreme weather conditions across Canada. Most recently, the insured damage from hurricane Fiona in Atlantic Canada reached around $660 million — the most expensive weather event in the region to date.

According to the Insurance Bureau of Canada (IBC), severe weather insurance claims are four times higher than they were 15 years ago nationwide.

Given this increased risk, home insurance is one thing Canadians can’t afford to ignore — particularly when it comes to protection from water. However, a significant number of Canadians are underinsured for water damage.

A recent Leger survey conducted on behalf of RATESDOTCA and BNN Bloomberg found that while 54% of Canadians own their home and have insurance on it, nearly one-third mistakenly think their standard home insurance policy includes coverage for flood protection. In reality, this coverage, which includes overland flooding, seepage, and sewer backup, is optional and therefore available only at an extra cost. (Many homeowners affected by Hurricane Fiona in September, for instance, didn't have insurance coverage for storm surges.)

This misunderstanding can become problematic when it comes time to submit a water damage claim to your home insurance provider. If you want to protect your home, make sure you know what you’re covered for in order to avoid a denied claim and having to pay out of pocket for the damage. 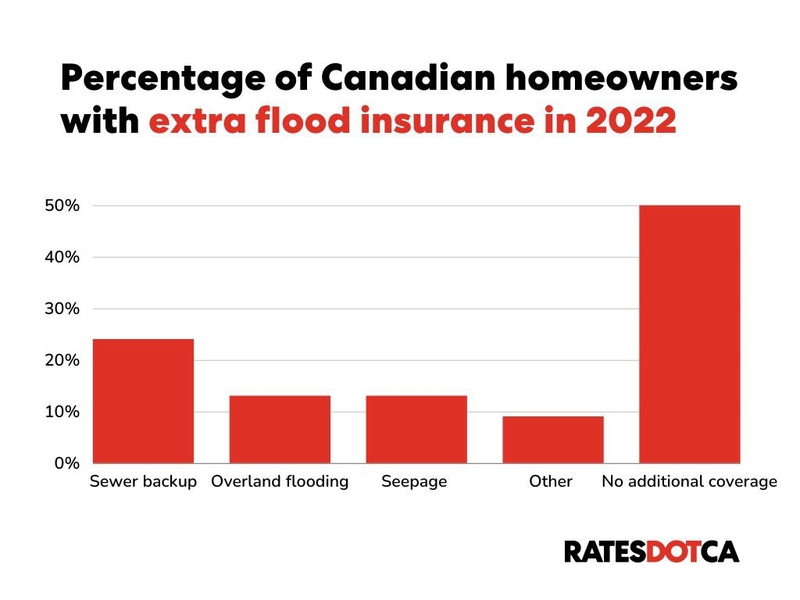 Below is a snapshot of what percentage of respondents have added optional water damage coverage:

Of the 50% of those who don’t have additional water damage coverage, 38% weren’t aware they need extra coverage for these incidents.

According to the survey, 32% of Canadian homeowners think their standard home insurance policy covers them against overland water damage and sewer backup.

Overland water refers to when water gets inside your home after overflowing from a body of water nearby. Sewer backup, on the other hand, refers to water that enters your home via a toilet or drain after a backup occurs.

Coverage for these perils is almost always excluded from home insurance policies. Homeowners need to purchase overland water coverage or sewer backup as endorsements, or add-ons, to their existing policy.

Fortunately, more homeowners (57%) are aware these coverages must be purchased in addition to their base coverage.

Lived experience tends to be the best teacher, as the survey revealed that homeowners who’ve submitted a prior water damage claim to their insurance company are much more likely to have added additional flood protection to their policy compared to those who haven’t (52% versus 34%).

Also, those 55+ years old are more likely to have added this extra flood coverage to their home policy compared to those under the age of 55: 44% versus 29%. This could be due to more years of homeownership and, as a result, more experience with the consequences of water damage.

In contrast, those under the age of 55 are less aware that their home insurance policies don’t include seepage, overland flooding, and sewer backup (41% versus 24% of those 55+).

However, those with an annual household income of less than $60,000 annually are more likely to have added additional water coverage than those making $100,000+ (41% versus 35%), perhaps suggesting that those with higher incomes feel confident that they could afford the damages out of pocket without the help of insurance.

What to know about optional flood coverage

Of the small percentage of those homeowners who have made a water damage claim before (16%), 20% were in the income bracket of less than $60,000. However, only 12% of respondents have had their claim mostly or fully covered. This could imply a gap in coverage, knowledge, or both — homeowners who made a claim believing they’d be covered, or not having adequate protection to begin with.

For instance, most home insurance policies won’t cover mould damage that’s resulted from consistent negligence over time. On a larger scale, if you live in a floodplain, you likely need added coverage due to your flood risk. However, you may not even know you live in a floodplain, nor have coverage available that meets your risk level. Fortunately, the government of Canada is working on a national public-private flood insurance program that can help the roughly 1.54 million houses in Canada that fall under this category receive adequate coverage.

If you haven’t added optional flood protection you need to your home insurance policy, compare home insurance quotes before renewing your policy and then ask your broker what this optional coverage will cost. That way, you can switch to the company with the lowest rate available for you and get the extra coverage you need. Ensuring your policy is as thorough as possible is the best way to make sure you’re covered for sudden water damage.