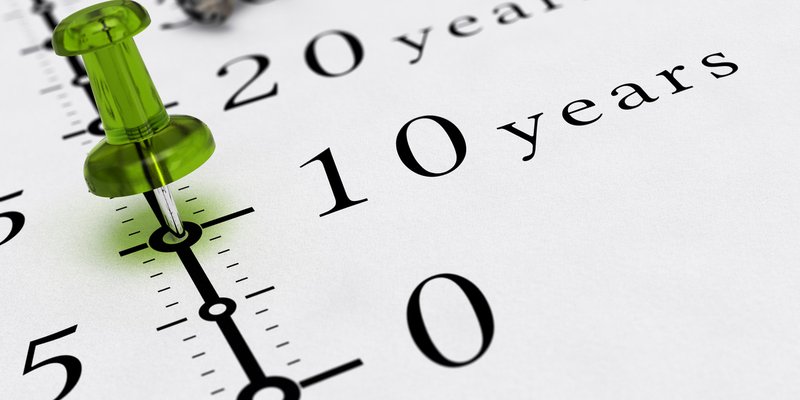 Decade-long fixed mortgages, once the pariah of rate terms, are starting to feel some love.

As of last week, 10-year rates fell to record lows of 2.59% or less. Tangerine has that rate nationally for all mortgage types, including owner-occupied purchases, transfers and refinances. Some Ontario-based brokers are effectively even lower at 2.58%, including cash rebates.

While the idea of not worrying about renewing til 2030 sounds enticing, shorter fixed terms garner all the attention these days. One-year fixed rates are going for as low as 1.49% on high-ratio (default-insured) purchases. That 110-bps difference between a '1' and a '10' translates into $3,200 of savings over the first 12 months on a standard $300,000 mortgage.

It’s what happens after that 12 months that’s the question.

Either way, let's explore some pros and cons to locking in for 10 long years.

Pros of a 10-Year Mortgage

In fact, borrowers used to pay up to 1.5+ percentage points more for 10 years of rate security, compared to a five-year fixed. Today, they’re paying “only” 60 basis points more with the best rates, give or take.

For those who anticipate interest rates jumping materially after this recession is over, that’s a historically small price to pay for rate assurance.

Ten-year products are made for those in search of stability, and that includes certain income property investors.

Many investors prefer to lock in long-term borrowing costs so they know what their cash flow will be. Given they tax-deduct their borrowed money, it softens the impact of paying more for a 10-year term.

Some investors would otherwise rely on an existing home equity line of credit (HELOC) to buy a rental property. HELOCs are going for roughly prime + 0.50% (2.95%) on average. That’s now 35+ bps more than a 10-year term. And if you believe the Bank of Canada’s messaging that we’re already at the lower bound for rates, there’s little chance of prime rate taking HELOC rates lower.

Set and forget it

One of the biggest benefits of a 10-year fixed mortgage is convenience. And yes, you’ll pay for that convenience, but for those who cringe at the thought of having to go through the rigmarole of renewing a mortgage, a 10-year term is a stress reliever.

Not only do you get a guaranteed rate and know your monthly mortgage payments for a full decade, but you avoid any risk of renewing into a higher rate in five years.

You also avoid any requalification risk, in the event your household loses income for some reason..

Cons of a 10-Year Mortgage

You’re Guaranteed to Pay More in Years One to Five

At today’s rates, that 2.59% 10-year will cost a guaranteed $8,400 more than a five-year fixed over the first five years, assuming a $300,000 mortgage and assuming you don’t change the mortgage early. That's just the interest difference alone.

Rates would have to be over 1.44 percentage points higher when you renew for a ten-year fixed to be more cost effective, based on interest cost. Again, that assumes you make no changes to the mortgage in the first five years. If you do, you’ll face the next “con” below.

In the modern era of monetary policy, 10-year fixed rates have never beat five-year fixed rates (or one- to four-year rates for that matter). But history doesn’t predict the future. There are even some who feel that today's massive fiscal spending and runaway deficits could eventually drive rates above the highs of the last decade.

In the case of 10-year fixeds, breaking the mortgage before its fifth anniversary could subject you to heinous prepayment penalties. (After the first five years, the maximum you’d pay is three months’ interest to get out, similar to a variable rate.)

The question is, can you be sure you’ll remain in your home and not need to increase the loan amount for at least five full years? The answer for most is no, with the average five-year fixed borrower breaking their mortgage after 3.8 years.

If inflation remains anchored near/below 2%, as it has been since 1991, the upside for rates is limited. Hence, despite never-before-seen lows in 10-year fixed rates, those who lock in that long might leave significant savings on the table by not choosing a shorter-term fixed rate.

Indeed, the “experts” say rates are headed sideways for years, for what that's worth. If so, well-qualified borrowers would be better off taking advantage of the lowest rates possible (under 2%).

Ultimately, however, some people just want lower payment risk, or less risk of not qualifying in the future or less to worry about in their lives in general. For them, a 10-year—for the same price as a five-year just three months ago—is a steal.