Many have given up on variable rates, figuring they’re about as low as they can go. And for existing variable-rate holders, that may be true.

For new mortgage shoppers, however, it’s a different story. Variable rates will continue dropping. The reason: banks still have ample room to increase their discounts from prime rate.

JARGON BUSTER: This “discount” refers to how much a lender prices its variable-rate mortgages below its prime rate. A lender’s prime rate typically changes when the Bank of Canada adjusts its overnight interest rate target. Lender discounts to prime rate change independent of that, typically moving with market-wide funding costs and the lender’s internal profit objectives.

The Story of Variable Rates in 2020

Variable discounts have slowly improved since 2012, peaking at prime – 1.45% for default-insured mortgages in November 2019 (the all-time record, according to our data).

As recently as March, they were in the prime – 1.30% range for insured mortgages and prime – 1.11% for uninsured. Then the pandemic happened.

From February to April, the average big-bank discount sank to just prime - 0.15%. It's been struggling back ever since.

As variable-rate discounts shrivelled, fixed rates continued a downward slide from their December 2018 peak. With 5-year fixed mortgages narrowing the gap with variables, and with fixed rates boasting variable-like savings and long-term rate stability, floating rates lost most of their lustre since March. But times are changing.

On a net basis, that’s helped variable rates reach record lows, despite typical discounts now averaging a mediocre prime – 0.65%. But there’s reason to believe we’re on our way back to the glory days of prime – 1.00. In fact, as of the last week a few deep-discount brokers are now beating that number for the first time since March.

Making that possible are more favourable funding costs for our big banks. When funding costs fall, banks and other lenders pass (some) savings on to consumers in the form of cheaper rates.

What do “more favourable funding costs” look like? Well, forgive us because this is going to get technical.

Over the past five years, the average discounted variable rate was about 101 basis points (bps) above the 3-month bankers' acceptance (BA) yield. BA's, if you're interested, are short-term promissory notes guaranteed by a major bank.

Think of that 101 bps as a rough “profit margin” of sorts. In December 2018, this “spread” fell to a puny 45 bps amid fierce competition. Today we’re at 117 bps, so there’s ample room to discount further.

Variable discounts are also correlated with overall bank funding costs. As you can see from the chart below, banks’ cost to raise capital for five years is now well below average thanks partly to liquidity support from the Bank of Canada. That, too, is improving discounts. 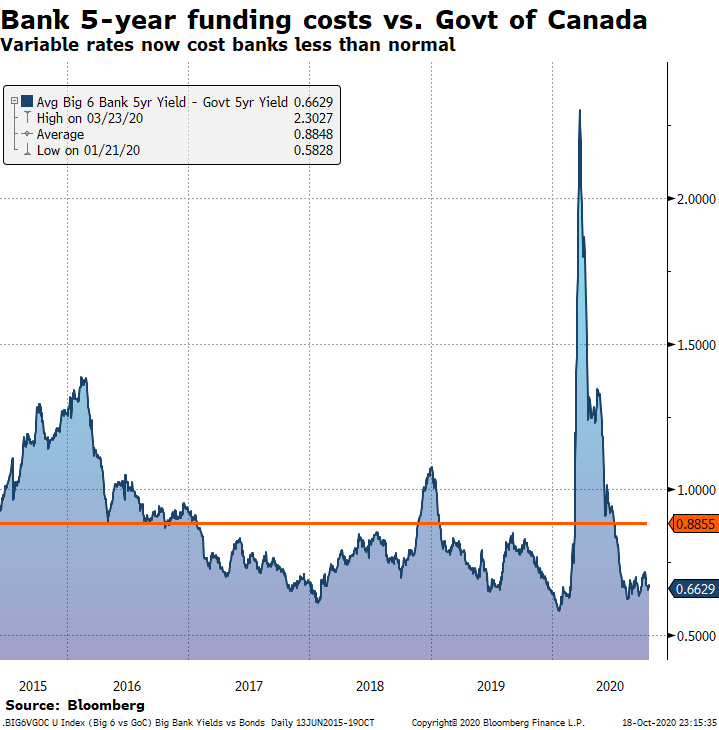 With the Bank of Canada publicly committed to low interest rates for the next two to three years, there’s arguably little risk of prime-rate hikes before 2023. Until core inflation is running above 2% and the economy is back to full capacity, variable rates should stay rock-bottom.

TD Bank, for one, sees no rate hikes until 2024. “We have clear guidance from central banks that interest rates will remain low for the next two to three years, if not longer,” its forecasters write.

That sounds encouraging for those leaning towards a floating rate over a fixed. Albeit, it would take only one or two rate hikes over the next three to four years to make a variable more expensive than a 5-year fixed (based on interest expense alone).

For the reasons cited above, it’s likely that variable-rate discounts keep recovering through 2021. That is, barring a housing crash, a pandemic sequel or some other crisis.

The more variable rates improve relative to fixed rates, the better one’s odds by floating their mortgage. Just remember, rates will eventually rebound. When that time comes, those who float their rate and don’t convert to a fixed rate (at the exact right time) could feel some wallet pain.

Rob McLister has been informing mortgage consumers and professionals since 2007. In that time, he’s written more than 2,500 mortgage stories for publications ranging from the Globe and Mail — where he presently serves as mortgage columnist — to the National Post, Maclean’s, Canadian Mortgage Trends and RateSpy.com. Regularly quoted throughout the media, Rob is a committed advocate of greater transparency in the mortgage industry. He’s also been a vocal consumer advocate for more sensible mortgage regulation. In 2011, he launched two mortgage fintechs: mortgage comparison website RateSpy.com and digital mortgage broker intelliMortgage Inc. The former is the go-to source of Canadian mortgage news and the only site comparing all publicly advertised prime mortgage rates. The latter is Canada's leading online mortgage provider for self-directed borrowers. Both companies were acquired in 2019 by Kanetix Ltd.