1-in-5 Canadians are driving to work more often, but 74% unaware they must inform their insurance provider 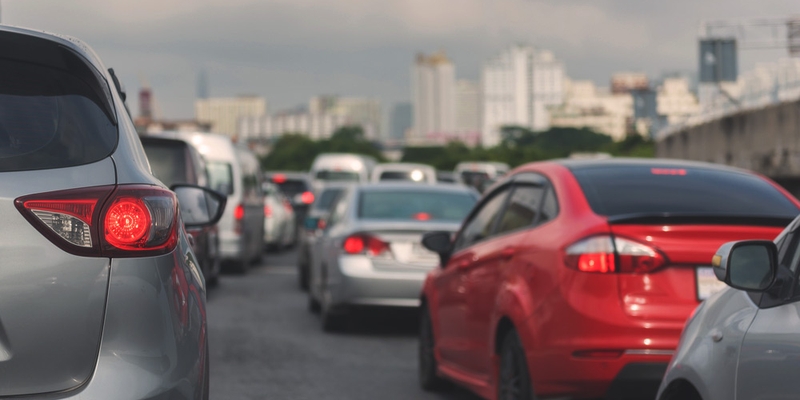 As more working Canadians return to the office, whether on a part-time or full-time basis, the office commute has once again become part of our Monday to Friday routine — a big adjustment from the last two years.

Many commuters got accustomed to driving far less as a result of the pandemic, and got a break on their auto insurance premiums because of it. But the tables have since turned. And as our weekday commutes continue to drive up the number of kilometres we drive annually, our auto insurance providers can’t be the last to know.

In fact, we’re obligated to inform our auto insurance company when our driving habits change, but doing so appears to be about as common as not doing so. A recent Leger survey conducted on behalf of RATESDOTCA and BNN Bloomberg found that while 20% of Canadians are driving to work more often than they were six months ago, 44% failed to report the increase in mileage to their insurance provider. And 74% aren’t even aware they have to.

With so many drivers reluctant to disclose their increased kilometres to their insurance company, it’s worth taking a deeper look into which drivers are most likely to follow the conditions of their policy and the impact keeping quiet can have on its validity.

One-in-five Canadians are commuting more, but 74% aren’t aware they must inform their insurance provider

“This information is outlined in the auto policy wordings, however, not everyone reviews these documents thoroughly,” says Kelsey Hawke, RATESDOTCA auto insurance expert. “If you are someone who doesn’t frequently make changes to your auto policy (vehicle usage, updating your address, or making vehicle changes) you may not be aware of the fact that changes to usage need to be disclosed to your insurance provider.”

While this knowledge gap may provide a logical rationale behind withholding a change in commute, there are still 54% of respondents who know they have to disclose their mileage increase but never have.

“Consumers may feel this information is not relevant and may think they’ll save money by not reporting, or that there would be no impact to their policy,” says Hawke.

However, those who choose to forgo the conversation with their insurance provider are setting themselves up to face the repercussions of a breach of policy.

If you’re involved in a collision on your way to work, for example, but claimed to have no commute, it would be clear you’ve misinformed your insurance company, Hawke says. Alternatively, if you’ve moved farther away from your office and are involved in an accident during your now-longer commute, your insurance provider would notice that, too. If you make a claim and your vehicle goes in for repair, the odometer can also provide a snapshot for your insurance provider as to how many kilometres you’ve driven versus how many you’ve recorded.

Working Canadians aged 18-34 are seeing their commute increase more than those 35+ and appear to be more aware of the conditions of their auto insurance policy. More 18-34-year-olds claimed to know about the requirement than those 35+ (71% versus 61%, respectively) and followed through by informing their provider about driving more frequently (49% versus 36%, respectively). 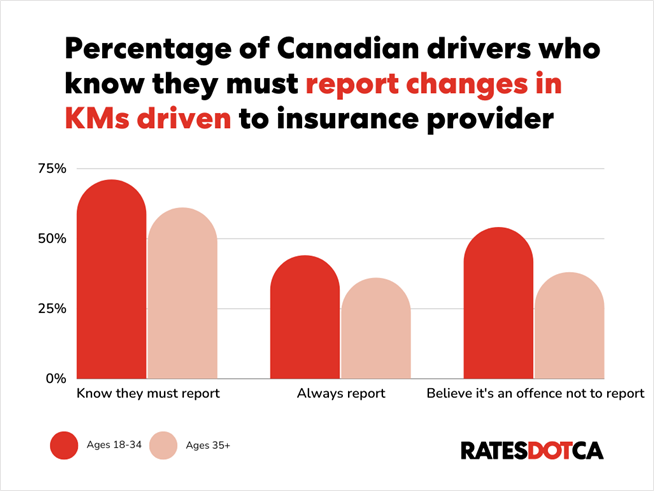 Why younger commuters appear to be more knowledgeable and communicative about their auto insurance policy could be for several reasons. According to Hawke, it may come down to something as simple as a young person’s policy being fresher in their mind. “If they’ve recently set up an auto policy, their broker or agent would have informed them of this requirement,” says Hawke.

The COVID-19 pandemic may have also played a part. During the many lockdowns, there was an abundance of media coverage about available insurance rebates for driving less, including information issued directly by insurance companies. Younger drivers, as well as those getting auto insurance for the first time, were entering an industry that was heavily advertising the need to inform your provider of kilometre changes.

“These drivers would have been informed of the importance of informing their insurance provider of usage changes on many different occasions,” says Hawke.

Age is also one of the top factors that affects your car insurance rate, and premiums tend to be more expensive for new and young drivers. Younger commuters could have experienced more urgency to intervene and accept savings wherever they could during lockdown. As a result, they may have dug a little deeper into their policy than more established drivers.

Regardless, it’s important for all age groups to recognize that withholding information from your insurance provider is a serious offence. Doing so can make your auto insurance coverage obsolete when you need it most.

“It’s mandatory to report usage changes,” says Hawke. “The best practice is to connect with your broker or agent at least once a year to ensure your policy information is accurate and up to date.

Nearly half of Canadians believe it’s a serious offence not to report a kilometre increase, but more than half never report it

Although 46% of Canadians consider non-disclosure of a kilometre increase to be a serious offence, the majority of this group (51%) still never report it. What’s more, 31% believe not reporting an increase in kilometres driven isn’t a serious offence at all.

“Those individuals who choose not to report changes in their usage to their insurance provider may not be aware of the implications of their decision,” says Hawke. “Not reporting changes to usage can be deemed a misrepresentation of policy details and can result in a claim being denied, which can cost the insured a significant amount of money.”

Keep in mind, reporting an increase in driving can increase your payment. “The risk for an accident or claim is going to be higher for a vehicle that is on the road more often,” says Hawke. “This higher risk equates to a higher premium.”

According to the RATESDOTCA auto insurance quoter, a 35-year-old male driver of a Honda Civic LX with a clean driving record living in Markham, Ont., with no daily work commute, is quoted about $190.08 per month for his premium. However, the same driver sees his lowest quoted premium increase by approximately 13%, to $215.08, when his daily one-way work commute increases to 40 kilometres (or 80 kilometres round-trip).

While an increase in mileage will bring up your premium, comparing car insurance rates can help you shop the market for a provider that will offer you the lowest possible rate — kilometre increase and all. Plus, reporting changes in your driving frequency can sometimes benefit you. For example, if you’re a hybrid or remote worker, driving less can save you money on your insurance premium by lowering your risk profile.

“If you are using your vehicle for a 50-kilometre commute on a daily basis, your premium will likely cost more than someone who works from home and does not commute,” says Hawke.

So, it’s best to get in the habit of communicating commute changes with your provider. Naturally, the benefits may fluctuate depending on the change, but it’s better to be confident you’re paying into a valid insurance policy before a claim is made.