Canadians Concerned About Debt. What it Means for Future Mortgage Trends

We’ve heard from experts and policy-makers for years that Canadian debt loads are a growing problem.

A new survey from Manulife backs that theory. It’s among the most vivid evidence yet that too many Canadians are getting buried in debt.

The headline stat: A full two out of five Canadians say they expect to remain indebted for life.

Another telling number hints at why that is. Out of every 100 respondents, 45 say their spending is increasing faster than their income. 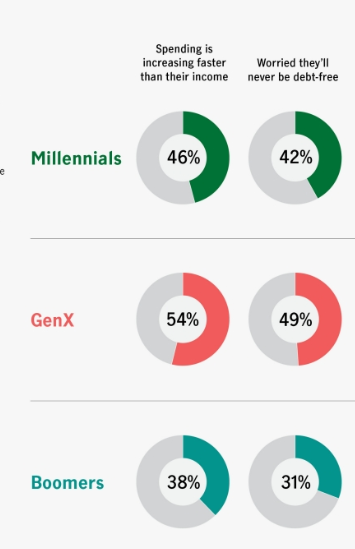 Now, not to state the obvious or anything, but when more money goes out than comes in, and this happens for years on end, it’s a recipe for financial disaster. Notably, this figure stood at just 33 out of 100 in Manulife’s spring survey.

There is a “financial wellness crisis,” said Rick Lunny, Manulife Bank’s President and CEO, in the report, and “it's affecting Canadians of all demographics.”

Those most likely to be on a financial collision course are Gen-Xers, who get lost in constant discussions of Millenials. Gen-Xers range between the ages of 40 and 54. A worrying 54% of them say their spending is increasing faster than their income.

“Generation X, which perceives itself as being in the most debt, saves the least of its after-tax income and is most likely to report that spending is outpacing income,” the report states. They’re also the most skeptical about ever being debt-free.

“Millennials are struggling too. They have experienced the most difficulty when trying to enter the workforce,” Manulife said. “However, things are not entirely bleak for this group as they are among the most likely to indicate that their income is increasing faster than their spending.”

Digging Deeper Into Those Piles of Debt

Canadians know there is a consumer debt problem. Ninety-four percent responded that they think the average household is carrying too much debt.

Here’s a drill-down into those debts:

What Does it Mean for Borrowers?

While this survey focused on Canadians’ attitudes and circumstances relating to non-mortgage debt, we’re concerned with the ramifications for mortgage holders.

As debt loads rise and persist longer into old age, we can expect:

This last outcome is perhaps most dangerous. Cutting off mortgage credit will, of course, force people into even higher-cost debt. That would create vicious cycles that pad those perma-debt household stats even more.

No. That’s not the answer. To get out of this mess we need solutions that address the causes, not regulation to treat the symptoms. Be it better wage growth, lower taxes, more housing supply or intensive education that reinforces living within our means. Whatever the answers are, Canada needs them now.