Bankruptcies Are Surging in Canada

Insolvencies are surging in Canada, new data from Equifax shows.

But even more interestingly, bankruptcies are soaring much faster than delinquencies.

Check out this chart: 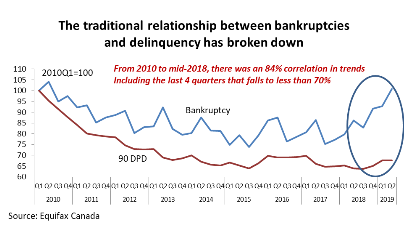 “Traditionally, the trends in delinquency and bankruptcy have been highly connected,” said an Equifax report last week. “That has completely broken down since mid-2018, with bankruptcy outpacing delinquency significantly.”

“The current trend shows that people are having much more difficulty when trouble hits,” Johnston explained to us. “Higher interest rates made some debt more expensive and consumers have been using consumer proposals as a means to manage their situations.”

Note: Equifax includes consumer proposals in its bankruptcy stats. Consumer proposals are a legal agreement (“proposal”) to pay creditors a portion of what is owed to them and/or extend the time one has to pay his/her debts. A bankruptcy is where insolvent debtors are relieved of their debts. But they must relinquish all non-exempt assets to a Licenced Insolvency Trustee.

Johnston adds, “We look at 90-day delinquency, but it appears consumers are not waiting that long to take action.”

“In the past, people may have been able to juggle payments, but the higher debt levels make that more difficult for some.” Imagine how they’d fare if interest rates weren’t just 35-125 basis points above their all-time lows.

“Those going delinquent have been more likely to leverage a consumer proposal (or even a full bankruptcy) earlier given their bigger debt burdens.”

Consumer proposals have become more popular because they let a debtor retain more of their assets. Not to mention, they’re less harmful to your credit (they stay on your credit report just three years versus six for a first-time bankruptcy.) Let’s hope that using them doesn’t become a major trend.

What Could It Mean?

It may be premature to jump to conclusions given average debt is slowing. But you also can’t help but wonder if the cracks in our consumer economy are starting to show.

The latest data show consumer insolvencies up 16.9% over last year. If bankruptcies are surging during a four-decade low in unemployment, what happens during the next recession?

With the government mortgage stress test forcing people to refinance with high-cost lenders, with credit card debt rising fast for those 46 and over, with longer car loans (10+ years in some cases) and with bigger mortgages, one wonders how many consumers won’t be able to keep up in a few years.

It will be worth keeping an eye on insolvency rates these next few quarters.