Was one of your new year’s resolutions to sell your house? If so, you may not need to wait until spring to do so. In fact, in some cases, you may be better off putting your home on the market before the real estate action heats up.

Winter homes are a hot sell

U.S.-based online brokerage firm Redfin crunched the numbers on all the sales their agents made in 19 markets, including Boston and Chicago, over a two-year period and found that homes listed in the December 21 through March 21 period were more likely to sell, would sell sooner, and for a higher “sale-to-list price ratio” than during any other period of the year.

“There are plenty of people who need to buy a home in the winter, whether it’s because of a job relocation or major family change, like a new baby. These buyers want to get into a home quickly, and are sometimes willing to pay top dollar,” said Paul Stone, a Denver-based Redfin agent.

Homes listed in the winter sold for a 1.2% higher sale-to-list ratio and sold a week earlier than those listed at any other time of year. They were also 9% more likely to sell within six months of going on the market.

Check out the numbers in Redfin's infographic: 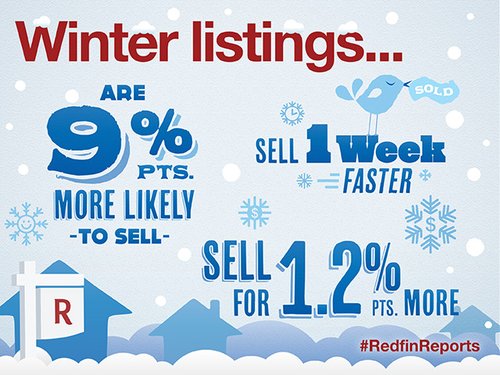 Getting an edge on the market

Closer to home, Toronto-based Sutton Group broker, Pro Sarbadhikari says there are “definitely” instances where homeowners have benefitted from selling in the off-season.

“When you have a good listing come up during the slow period it can go for more than it would have in spring,” says Sarbadhikari. “If it’s the only thing that’s available, people will jump all over it.”

During the snowy season, you’ll want to make sure you have plenty of mats and racks in your entrance area for open-house attendees to leave their boots. You should also leave signs indicating that footwear should be removed during any weekday visits.

You’ll also need to be extra vigilant in removing all snow from walkways so potential buyers can easily access all exterior areas of the property. Buyers will also be curious to know what’s buried beneath the snow. If you have a pool, nice landscaping, or immaculate garden, make sure you have photos of your outdoor areas on display. And don’t forget that age-old realtors trick of lighting the fireplace – or a candle that’s scented to smell like one – to give that comfortable, homey feel.

Timing can be everything

It’s impossible to predict the weather days or weeks in advance, so you have to be accept that a heavy snowfall can unexpectedly kibosh your open house. But there are some things you can plan around: