45% of Car Owners Let Someone Else Drive Their Ride

But do you know what you’re getting yourself into when you lend your car to a friend?

Canadian car owners are generous with their vehicles a new survey from Rates.ca has found. According to more than 3,000 survey respondents, 44.8% of car owners have let another driver borrow their vehicle. 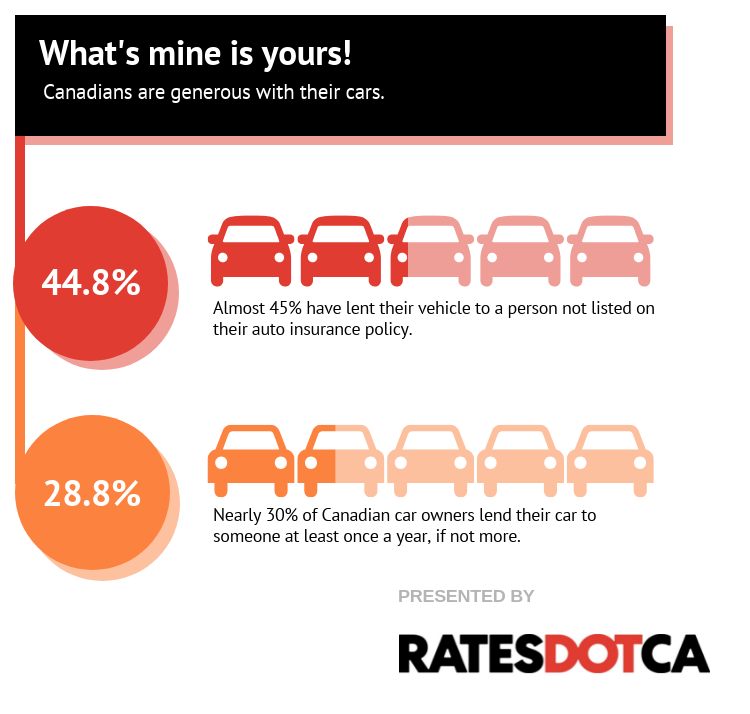 As you get older, you’re less likely to lend your car

Age factors into how often a person lets someone borrow their car. Millennials and Gen Z car owners, for example, are more likely to lend their car than their older counterparts: 14.6% say they lend their car to a friend weekly, while just 8% of Gen Xers and 2.8% of Boomers (or older) do. It’s a trend that dominates across the board; whether lending their vehicle out weekly, monthly, or yearly, those under the age of 35 are more likely to say yes to a friend in need of a drive.

There could be a variety of reasons for this trend. It’s likely, for example, that car ownership increases as we get older and the opportunity to lend or the need to borrow a car decreases. It could also be that older drivers have learned the hard truth that sometimes comes with lending your car out (more on this later). 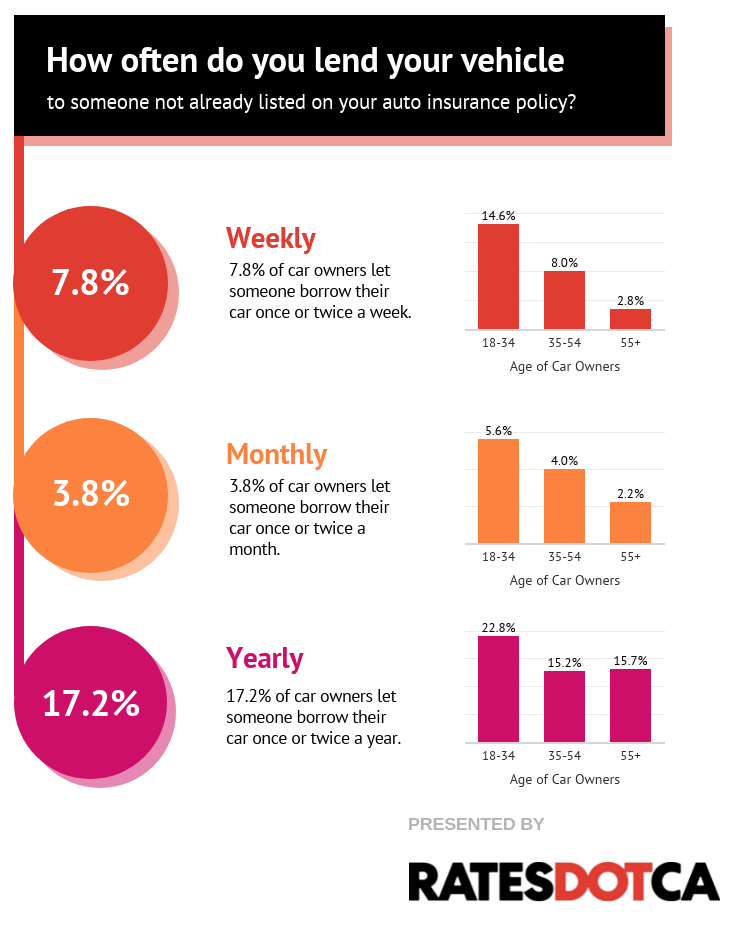 Men are more likely to hand over their keys

The results of the survey also reveal a gender divide. Men, over women, are more likely to hand over the keys to their vehicle: 47.8% of men have let someone borrow their car, compared to 40.3% of women. 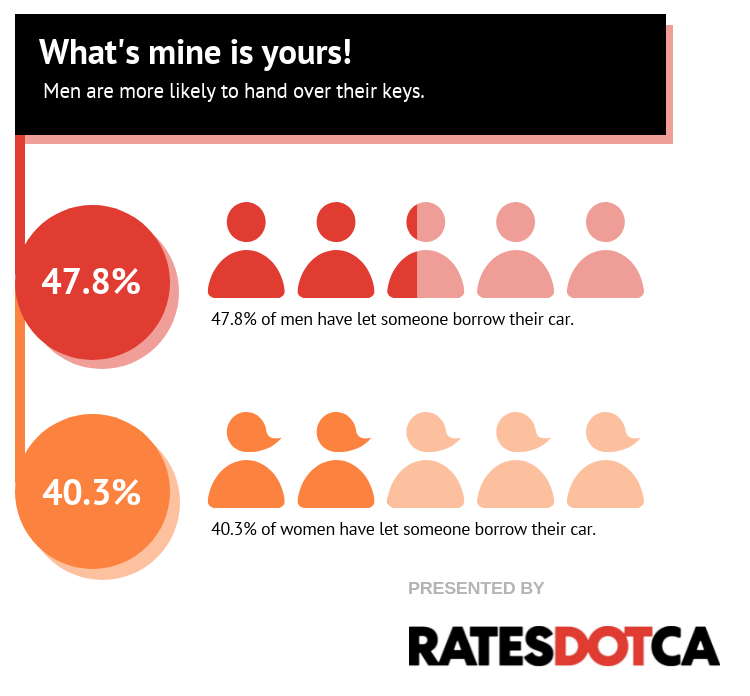 What’s the big deal about lending your car to a friend?

There’s a lot that could go wrong when you lend your vehicle and when you lend your car out regularly to the same individual, that person should be listed on your policy. It is especially important for the 7.8% of car owners who lend their car out once or twice a week and the 3.8% who do so several times a month to note.

According to the Insurance Bureau of Canada, “you can’t lend your auto on a regular basis to someone without naming him or her on your insurance policy. If, for example, a friend wants to drive your auto every Friday to go grocery shopping, update your policy to include him or her as an occasional driver.”

For those who lend their car out irregularly, it’s a nice gesture, but a gesture that comes with risks. What happens if that person gets a ticket while driving your vehicle? Or worse, are involved in a collision? Do you know if they’re even legally allowed to drive?

What Happens If You Lend Your Car to Someone Who Isn’t Licensed to Drive?

Let’s start with your would-be borrower’s licence. If it turns out they don’t have a valid licence (perhaps it’s suspended) and are caught driving, the vehicle (your vehicle!) will likely be towed away and impounded. You’ll be on the hook for paying to get your car back not to mention the hassle of it all.

It may be an awkward conversation, but if someone asks to borrow your car, ask them if they have a valid licence and are legally allowed to drive. Better to be safe than sorry.

What Happens If You Lend Your Car to Someone Who Gets a Ticket?

How a ticket affects you will depend on the type of ticket the borrower received. If it’s a parking ticket or red light camera ticket, ultimately you’re responsible for ensuring it gets paid. Whether the money comes out of your wallet or the driver’s wallet, the fine will need to be paid to ensure you’re able to renew your licence plate sticker.

If the driver is pulled over by police for a moving violation, the good news is the ticket will be in their name and will go on their driving record. It will not affect your auto insurance rates. The only risk to you is if the ticket involves roadside penalties too. If they’re found to be impaired or driving at extremely excessive speeds, for example, it’s likely the vehicle will be towed and impounded.

What Happens If You Lend Your Car to Someone Who Gets in an Accident?

Accidents happen, and when they do, it’s your auto insurance that will kick in as the primary coverage. It’s an auto insurance myth that the borrower’s insurance (if they have it) will take over. Auto insurance is tied to the vehicle, not the driver, so when you lend it, you’re lending your insurance too.

If it’s an at-fault collision, the claim will go on your insurance history and will likely affect your premiums (unless you have accident forgiveness) for six years. There is just one way to change this expensive reality. When, or if, the borrower is listed on an insurance policy, you can request a transfer of the collision over to their insurance history after which you might be able to get it removed from yours.

If it’s a 100% not-at-fault collision, your rates should be unaffected although there is still the hassle of getting your vehicle repaired.

What Happens If You Lend Your Car to Someone and It’s Stolen in Their Care?

If your vehicle is stolen and you have comprehensive coverage, you’ll be covered for the loss no matter who was last to drive your vehicle. Although it’s unlikely your premiums would be affected by the insurance claim, someone — whether it’s you or the person who borrowed your car — will have to pay the deductible.

Lending your car means having a chat

Many people don’t realize that when you lend your car, your lending your auto insurance too. Before you hand over the keys to a friend in need of a ride, it’s sage advice to have a chat about the “what ifs” that could happen and who will cover what.

The online survey was conducted from January 2, 2020, to January 10, 2020, with Google Surveys. The survey sample included 3,020 Canadians who indicated they owned a car and were 18 years of age and older.